In our little series on the occasion of the Year of Cultural Heritage, another bronze sculpture in the urban space follows today. The “peeing boy”, created by Jérôme Duquesnoy in 1619, is a well-known fountain figure in Brussels. Catherine Emerson describes the figure as a strange, hybrid object:

It is a strange, hybrid object, and there is no explanatory text accompanying it to describe what it commemorates. Nevertheless, the practices of tourism seem to normalize it: numerous souvenir shops stock commemorative items. Postcards, playing cards, snow shakers, corkscrews all can be obtained with a picture of Manneken Pis and, for customers with a a bigger budget, replica fountains stand chained in a row (Emerson, p. 1).

There are various legends surrounding the 61-centimetre-high bronze statue. The most famous says that Gottfried III of Leuven was taken by his troops as a two-year-old on the battlefield against the troops of the Berthouts. To be on the safe side, they hung the little count in a basket from a tree. This was to remind the troops for whom they went into battle. From his basket, the two-year-old urinated on the Berthouts, who eventually lost the battle. 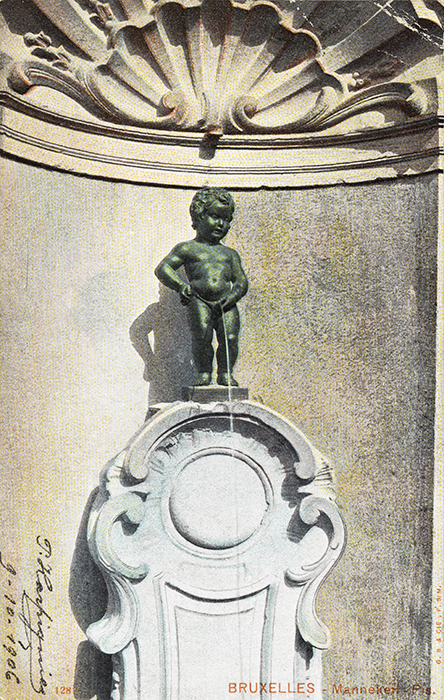 The figure on the Rue de l’Étuve, very popular with tourists as a photo subject, was stolen several times. Today’s statue is a copy from 1965, it is even unclear whether the original, which is kept in the Brussels City Museum, is genuine. It is suspected that a copy was made after a theft in 1817. However, this does not seem to have any influence on the unbroken attraction of the fountain figure for tourists.