Would Max Frisch have followed the Olympic Games in Rio if he were alive today? Some claim he took little interest in sport. Others say he absolutely loved it. Either way, a wide variety of physical activities featured in his life and work. 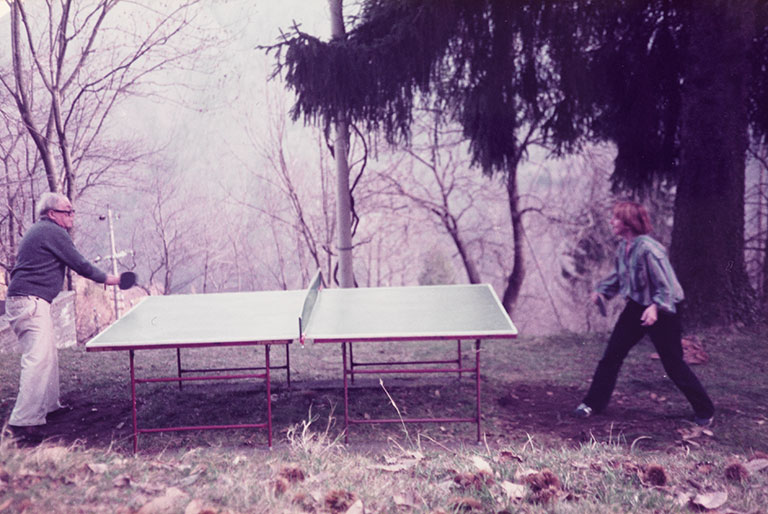 As a young man, Frisch preferred to play football with his classmates than bury himself in books. He wanted to play in goal for the national team. And together with his brother, he would venture out on challenging mountain hikes, which was also reflected in his writing: in his early story An Answer from the Silence, the treacherous ascent of an alpine peak is stylised into a life-and-death exploit.[1]

In the wintertime, Frisch would strap on his ice skates and trudge up to the artificial Dolder ice rink. Or he would ski, bursting with “Schneefreude!” (snowy glee), as an article from the winter of 1933 is entitled. Frisch writes full of enthusiasm:

Sometimes, instead of crowing with glee into the winter’s morning, which an adult will not allow himself, of course, one taps one’s ski pole against a fir tree so that one of those snow cushions topples and explodes into an icy, glittering mist. One quivers with delight.[2]

Besides the mountains, Frisch was also drawn to water. Lake Zurich, with its special blue, which he described in numerous works, even seemed like waters of longing to him: “All around there is a shimmering and shine as if cast in liquid silver.” As a 24-year-old, he learned to swim – three years previously, he rowed his “seawoman” to Quai Bridge: “And when I had paid, she said: it was nice.”[3] Presumably, Frisch paid for this outing with the money he had earned as a reporter for the Neue Zürcher Zeitung with small literary shorts of his sporting escapades. His journalism was met with such interest that the newspaper sent him to Prague in 1933 to report on the Ice Hockey World Cup.

Sport and a livelihood were also combined in the open air swimming pool, which Frisch designed as an architect (and ETH-Zurich graduate) and opened in 1949. The Letzigraben swimming pool has an Olympic-sized swimming pool with a filigree, ten-metre diving platform – the first of its kind in Switzerland. Together with Bertolt Brecht, Frisch stood at the top and presented his work to the master.

Not only are hiking, ice-skating, skiing, rowing and swimming worthy of mention, but also cycling, games on the author’s private boccia alley in Ticino – or pool. The latter even discourages Felix Schaad, the hero from Frisch’s story Bluebeard, from committing suicide: “What helps is billiards.”[4]

Sport as a lifesaver – but also as a metaphor for everyday writing: one photograph shows Frisch with his personal secretary Rosemarie Primault next to a table tennis table in Berzona. Frisch hit his textual balls flying across Switzerland’s borders, such as to Frankfurt, where the Suhrkamp Verlag publishing house was based. There, his editor, Elisabeth Borchers, was stimulated by Frisch’s ideas – and in turn stimulated Frisch’s writing. A letter from 1980 reveals just how the game of spiritual ping-pong could sometimes hit the net. In it, Borchers asked her author for his opinion on someone else’s script, but he did not seem particularly interested and curtly declined, making a reference to a sports broadcast:

and now I am drawn by the television: table tennis; I really love the gracefulness of these spinning balls. Greetings,

[1] Max Frisch: An Answer from the Silence. A Story from the Mountains, Calcutta, London, New York: Seagull Books 2011.

[5] From an unpublished letter from Max Frisch to Elisabeth Borchers (© Max Frisch Archive). Translated from German.