Commercial air travel for tourists began in Europe after the First World War in 1919. In Switzerland, Walter Mittelholzer and Alfred Comte, the driving forces behind the Swiss airline company Ad Astra Aero AG, started conducting tourist flights to the Alps in the early 1920s. As these ceased in the winter months, two tourist flights to Africa in 1929/30 and 1930/31 were just what the doctor ordered for Mittelholzer. Not only did they enable him to put the idle winter season to good use; they also flushed money into the airliner’s coffers.

The Kilimanjaro flight was proposed and funded by the banker Baron Louis von Rothschild, who was looking to undertake a hunting expedition to the Serengeti plain, the richest area in the world for big game. Mittelholzer dedicated his book Kilimandjaroflug to the flight’s patron: “For Mr Baron Louis von Rothschild, who made my first flight over Kilimanjaro possible thanks to his hunting trip.” In his travelogue, the pilot writes:

Anyone who has fallen under Africa’s unique spell will always feel the pull of this land of endless expanses and golden freedom; presumably the reason why, when Baron Louis von Rothschild (Vienna) asked whether I would be inclined to fly him and three hunting friends to the Kilimanjaro area from Cairo at very short notice in the winter of 1929/30, I answered with a gleeful “yes”. (Kilimandjaroflug, p. 12)

While planning the expedition, Mittelholzer enlisted the help of George Wood, a British hunter who had been working in Africa for years. Once the entry clearance had been submitted to the Italian, French, British and Egyptian authorities, and the stops to stock up on petrol and oil supplies had been organised, the party was ready for take-off. The aircraft selected, a Fokker F-VIIb christened Switzerland III, had been in the service of the Swiss airline company Ad Astra Aero in Zurich since the spring of 1929. Finally, on 15 December 1929, Mittelholzer took off in Dübendorf together with Alfred Künzle and flew over Catania, Benghazi, Cairo, Khartoum and Mongalla to Nairobi. From the Kenyan capital and a camp set up especially by a British company 240 kilometres southwest of the city, the hunting party conducted fourteen flights, including to Mount Kenya (first flyover), the Serengeti and Kilimanjaro with its highest peak Kibo (first flyover). Hunting excursions were also made by car, such as on one “dewy January morning”:

We leave our camp at ten o’clock with twenty-five boys in two cars and three lorries and drive through the tall grass, every so often traversing streams flanked with acacias and phoenix palms, before heading southeastwards out into the plains. […] Now we see the lions, too. […] Baron Rothschild fires from a range of one hundred paces. […] The animal leaps up and makes a few bounds before collapsing again badly wounded. […] We follow him, our rifles under our arms; me armed with my camera. Suddenly, he spots us, whips the ground with his tail and lets out a roar. We are all mesmerised. He is the first lion we have seen at such close quarters in the wild. On tenterhooks, we await what will happen next. (Kilimandjaroflug, p. 65). 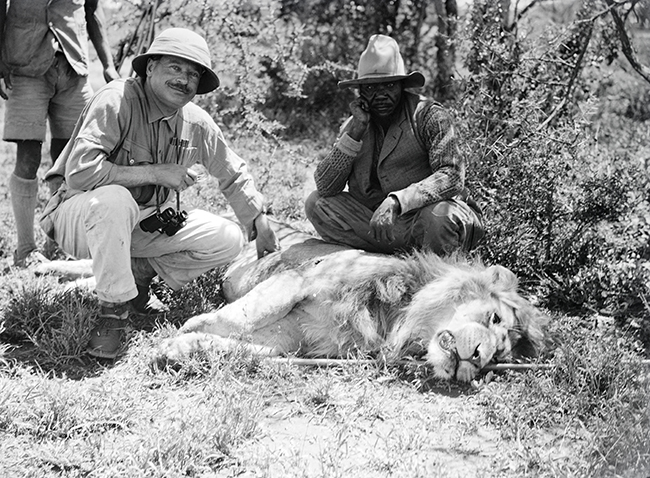 We humans have always felt drawn to nature and been travelling to remote regions for centuries. Big-game hunting also has a long history in Africa. The word “safari” came into fashion in Europe after the American President Theodore Roosevelt embarked on an expedition to East Africa in 1909. In around 1930, organising safaris had even blossomed into a rare Afro-European fusion (cf. Steinhart, pp. 113-114). Apart from the usual air of superiority, the safari experience portrayed by Mittelholzer contained all the elements of modern thrill-seeking tourism: the use of the local population as support staff (“boys”); adventure; the encounter with the wild and the untamed; new, first-time experiences; and the associated frisson of excitement. Experiences are documented meticulously on camera so the valuable snapshots in time can be relived over and over again in the future. The ‘shooting’ of the souvenir photo after the killing of the animal is like the collection of trophies a typical gesture of the tourist.

Like the Kilimanjaro flight, the Lake Chad flight was a tourist expedition funded by the client, this time the American businessman and adventurer Kingsley Macomber. The flight in a triple-engine Fokker F-VIIb-3m took the travel party over Spain, Morocco and the Atlas Mountains to the Sahara Desert. The flightpath then continued over the Niger to Senegal, before heading northwards again to the African coast, back over Spain and France towards home. It was not without a certain pride, Mittelholzer noted in Marrakech that the city was not yet one that “… European tourist parties feel duty-bound to go and admire.” (Tschadseeflug, p. 35). He industriously took photographs from the ground and air while his passenger enjoyed the ride:

Mr Macomber is sitting in his cabin armchair without a care in the world. The fact that he is quintessentially modern is his principle trait. To him, flying is a means to live more pleasurably, find relaxation and recuperate from his daily and arduous financial obligations. (Tschadseeflug, p. 59). 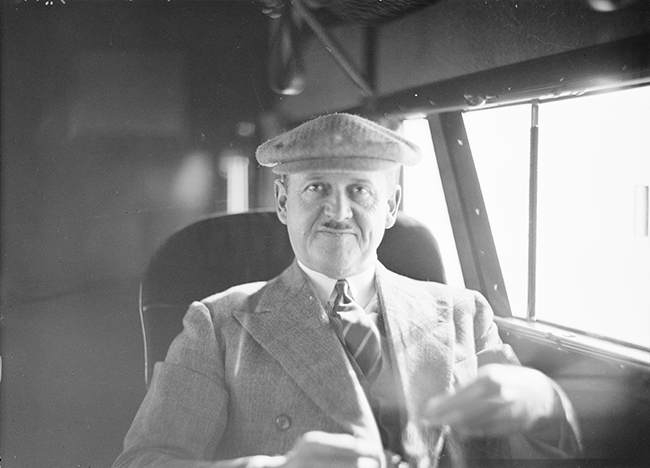 Walter Mittelholzer: our guest Kingsley Macomber on board as we fly over the Mediterranean (LBS_MH02-08-0707)

Macomber was privileged, for only a handful of extremely affluent people could afford such a trip in those days. As he sought experiences outside the confines of his everyday practices, he was a prototype of a tourist and thus one of the best models for the modern human around (cf. MacCannell, p. 1). After the flight to Lake Chad and while landing in Casablanca on the journey home, Mittelholzer was also obviously refreshed:

And then, after a smooth landing, we were back in the heart of the noisy hustle and bustle of the city. One dives into the newspapers and casts them aside again in disappointment. After our African adventure, we find nothing more insignificant and tedious that the events of the big, wide world. (Tschadseeflug, p. 107).

The package tour to Lake Chad drew to a close when the plane touched down in Zurich on 23 January 1931. Barely two months later, on 17 March, the Ad Astra General Meeting decided, under pressure from the government, to dissolve the company and merge with Balair to form Swissair retrospectively as of 31 December 1930. Mittelholzer served as technical director and ran Ad Astra Photo AG (from 1934 Swissair Photo) until his tragic death in a climbing accident in 1937. For Switzerland, however, the age of global tourism had begun.

MacCannell, Dean: The Tourist, A New Theory of the Leisure Class, New York 1976

On the topic of colonialism, package tours, hunting and the beginning of global tourism, see the corresponding chapter in: