The article from 20.1.2011 talks about skiing maps from the early days of ski sport. In recent years, skiing tours in Switzerland have boomed. In the early years, the high mountains were primarily scaled on skis in the springtime, when the snow cover was hardened and the risk or avalanches in the morning was slim. Thanks to modern material and improved skiing technology, skiers and snowshoe trekkers also go out and about in the loose powdery snow (or unfortunately also frequently in the “crusted snow”) in the early and middle of winter these days. 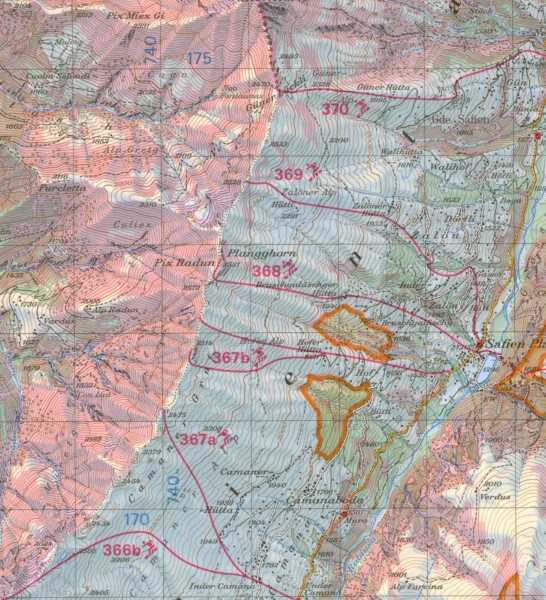 Thanks to skiing tour maps 1:50,000, topographic maps 1:25,000 (both from the Swiss Federal Office of Topography), the ski tour guidebooks from the Swiss Alpine Club (SAC), the avalanche bulletin, which can be accessed via the internet (www.slf.ch), and the latest weather forecasts, skiing tours can be planned effectively.

In the detail of the current ski tour map shown (No. 275 S, Safiental), the proposed routes are marked in red. They constitute a selection and show only the rough course. The numbers next to the route refer to a detailed description in the ski tour guidebook (Skitouren Nordbünden:  Prätigau, Surselva, Rheinwald by Vital Eggenberger, Bern 2008). If the tour is also suitable for snowboarders, a little symbol appears next to the route number. Dotted route sections can only be covered on foot. Steep slopes with gradients from 30° are marked in red. In these areas, there is an increased risk of slab avalanches in adverse conditions. Our map detail from Safiental displays gentle inclines towards the south-east which are ideal for ski tours, and steep slopes marked in red towards the north-west which should only be skied in safe conditions. Areas that must not be entered in the wintertime or only along the marked routes are outlined in yellow. These are nature reserves, where wild animals withdraw in the wintertime. Changes to the existing or new nature reserves that have not yet been marked on the ski tour map can be viewed on the web portal  www.respektiere-deine-grenzen.ch or www.wildruhezonen.ch.
For skiers who arrive by public transport, the Swiss Post bus services marked in yellow with red dots indicating the stops are useful.

Additional information is provided on the back of the ski tour maps: a symbol key; information on the time and difficulty of the routes; information on travelling there, nature reserves and wild animals, avalanches, mountain rescue; a checklist; useful telephone numbers and internet addresses; and literature on the subject.

The ski tour maps cover practically the entire Swiss Alpine region and are also updated. A gap in the border region with Italy was filled in this year with the page Valle Antigorio No. 275 S.

All the current ski tour maps of Switzerland with the corresponding ski tour guidebooks and the topographical maps 1:25,000 for the detailed planning are on display in the Special Collections Reading Room in the Map Collection’s open access library. They cannot be borrowed, but excerpts of maps and tour guidebooks may be photocopied for private purposes.