Undoubtedly, the exclamation was an expression of Albert Einstein’s joy regarding his return to his alma mater. He had studied mathematics and physics at the Federal Polytechnic School (now ETH Zurich) from 1896 to 1900, where he obtained a teaching diploma. However, it is fair to speculate that his appointment as a full professor of theoretical physics also triggered a sense of gratification in him and the cry of joy might well have contained a hint of sarcasm. After all, Einstein had often been notably absent during his student days, something which did not escape his professors’ notice and was also reflected in his final marks. As he wrote in an early letter to his fatherly friend Alfred Stern, for instance: “[…] As I am told, I am not in any of my former teachers’ good books” (Albert Einstein to Alfred Stern on 3 May 1901). As a result, he also had trouble finding a position after leaving university. 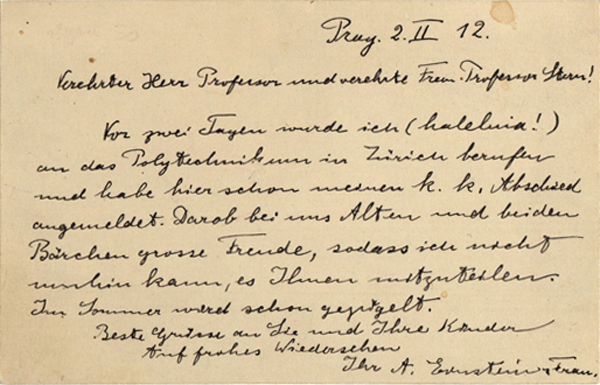 Two days ago, I received (hallelujah!) a post at the Polytechnic School and have already handed in my imperial-royal notice here. Hence such immense delight for us old folk and the two cubs that I could not wait to tell you the news. We will already be moving in the summer.

Best regards to you and your children

I look forward to seeing you again

Your A. Einstein & wife

In 1905 his life took a new twist. During his spell as a patent clerk in Bern, he published four ground-breaking works before being made an associate professor at the University of Zurich and then a full professor in Prague. This is where he handed in his “imperial-royal” notice (he had accepted Austrian citizenship in the Austro-Hungarian Empire to work in the city) to return to Zurich with his “two cubs”, sons Hans Albert and Eduard, and his wife, Mileva.

Apart from anything else, Einstein was looking forward to seeing his friend Alfred Stern again. Stern, like Einstein a German Jew from a middle-class background, had been made a full professor of history at the Federal Polytechnic School in Zurich in 1887, where he remained until he retired in 1928. The friendship between the two men began during Einstein’s student years. Einstein would frequently visit the Stern household and shared a passion for music with the historian. Besides making music together, Einstein repeatedly enthused about the kindness and joviality that reigned in the family. Einstein’s affectionate relationship with the entire Stern family lasted a lifetime.