Around 50,000 French, Belgian and Polish soldiers and civilian refugees fleeing from the Wehrmacht crossed the Swiss border in Neuchatel Jura in June 1940. They were disarmed and detained in camps. The map detail depicts the internment camps on 3 July 1940. The French camps are marked in red, the Poles in blue and the Belgians in turquoise. The Map Collection holds eight maps on this topic in all (donated by an unknown source). Besides the nationalities and locations of the camp inmates, the maps also display the deployment and strength of the guards (Swiss doing their military service will understand the symbols and abbreviations): 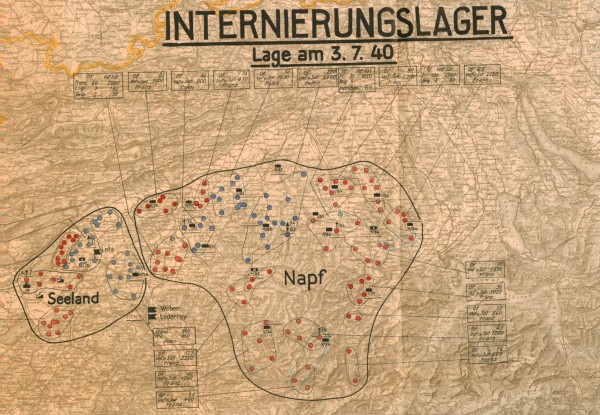 The eight maps are manuscript maps; all the information on the camps was added using ink and stencils. The general map of Switzerland with a scale of 1:300,000, which was used by the army in the Second World War, serves as a topographical basis.

Incidentally, the inmates were also used in industry, agriculture and above all in road construction. This is how the “Polish paths” we now appreciate as low-traffic cycle and hiking routes came about in many regions of the country.

The eight maps bearing the location numbers K 620103 can be viewed in the Collections and Archives Reading Room.

Link to title record on the Search Portal