Approximately 10 per cent of Switzerland’s total volume of foreign trade is currently transacted through the three Rhine ports in the city and region of Basel. Around 30 to 40 percent of mineral oil reaches Switzerland via the Rhine ports (Wikipedia, 2011). The maps, plans, photos and postcards presented here document the period from 1917 to 1926, during which port facilities in Basel were used, projected, built and extended. 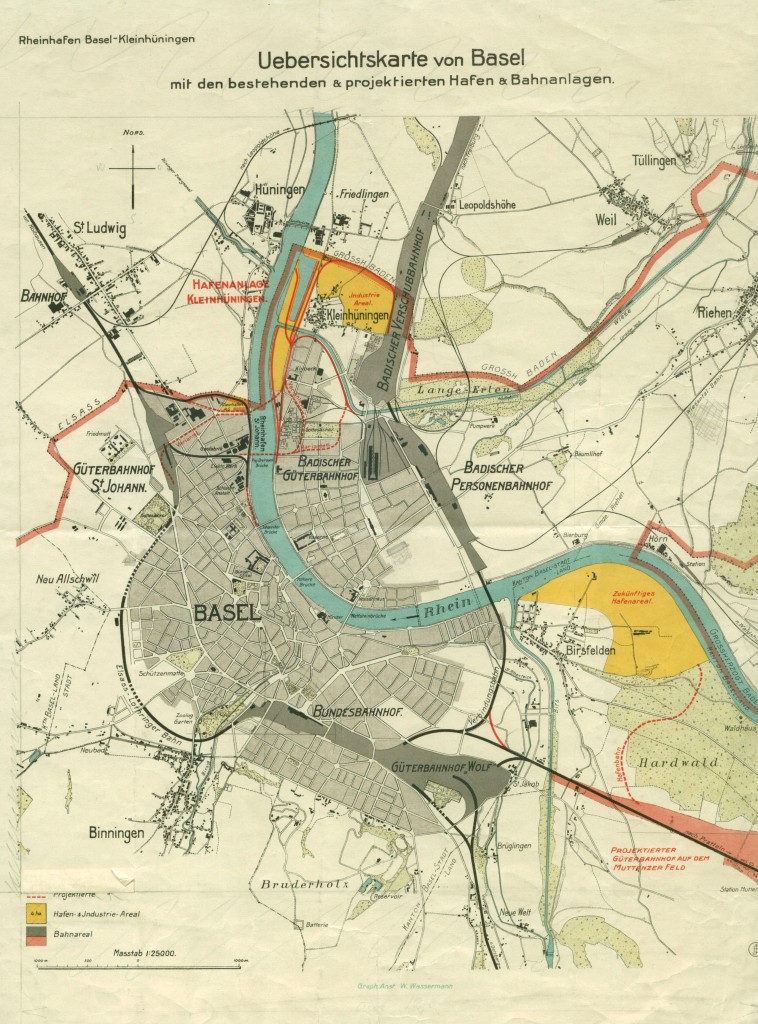 Fig. 1: Overview map of Basel with the existing & projected port & railway facilities, 1917 (all maps and photos can be enlarged by mouse click) 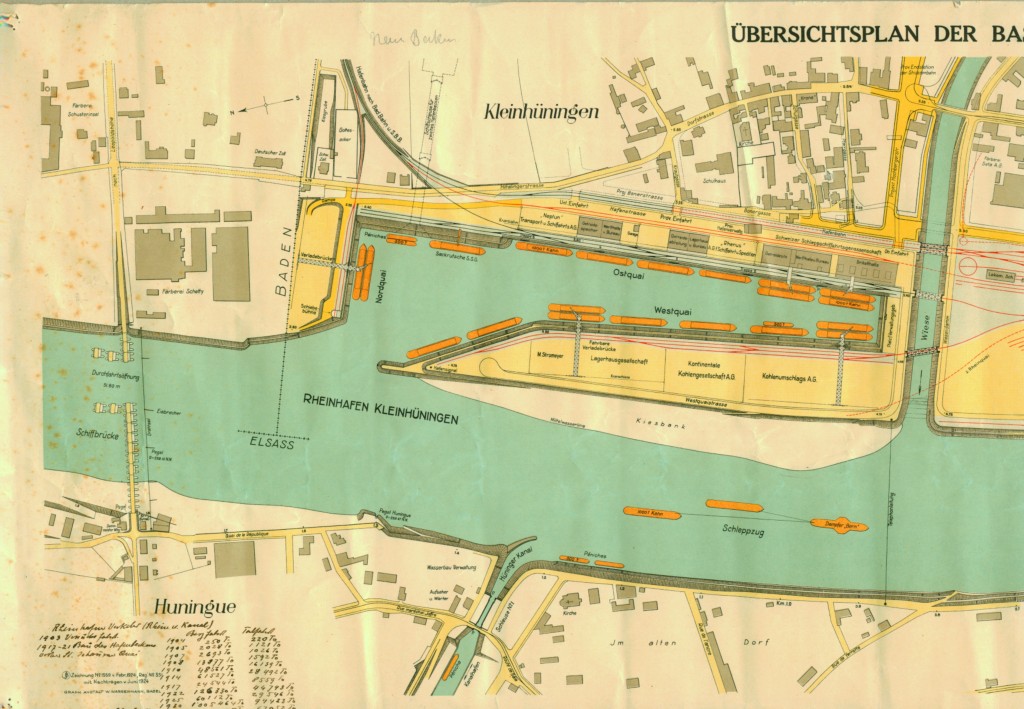 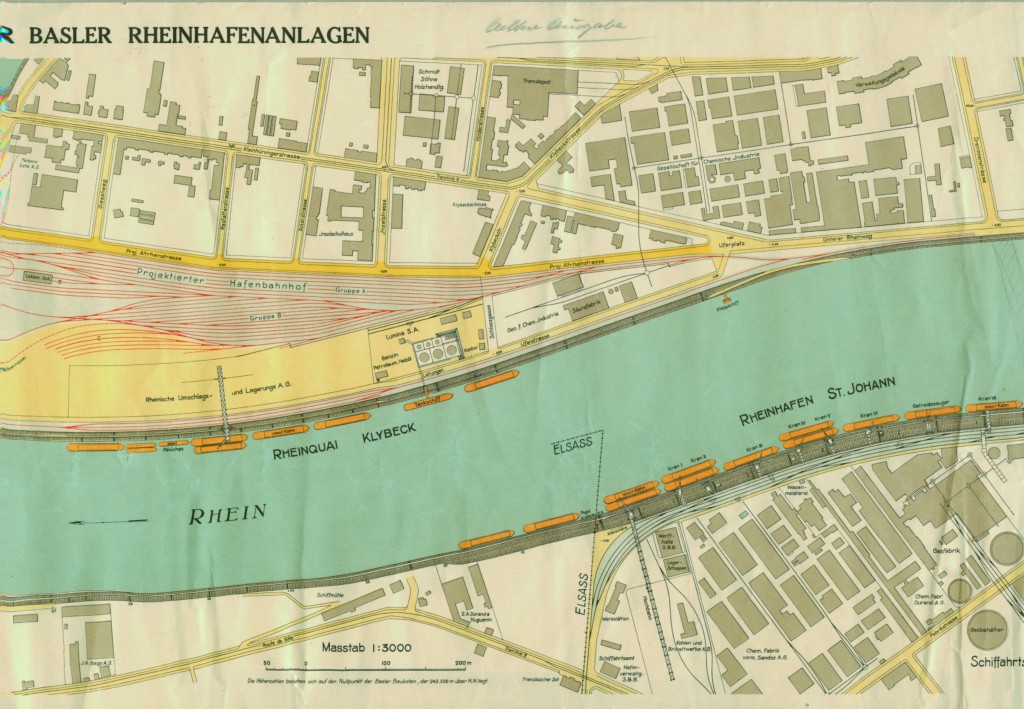 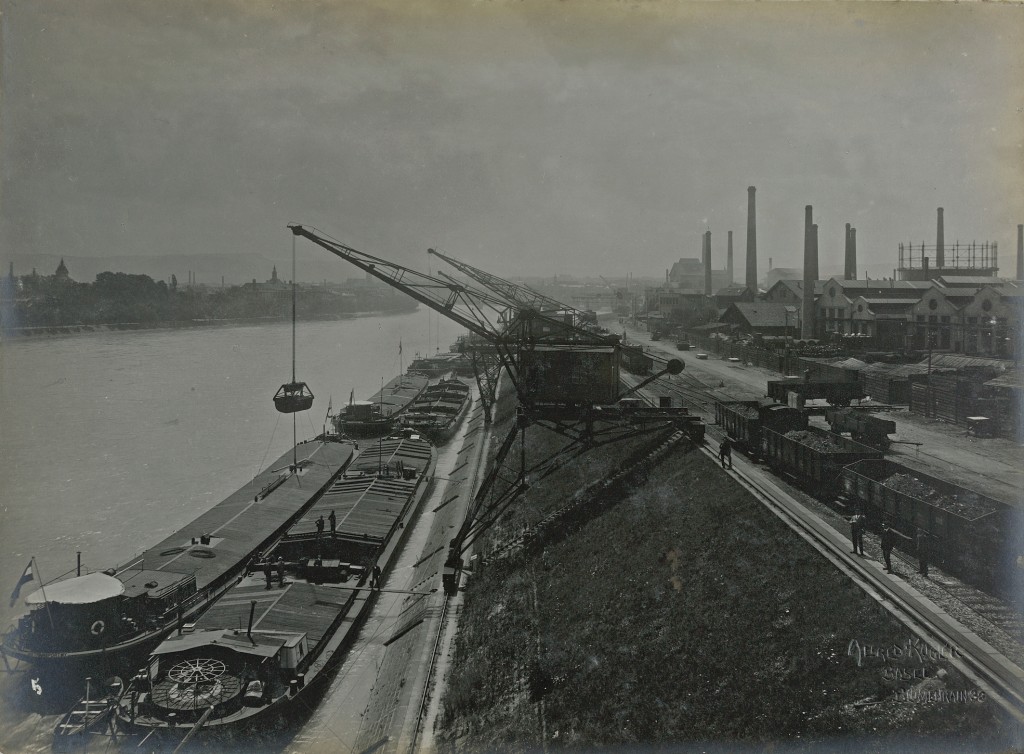 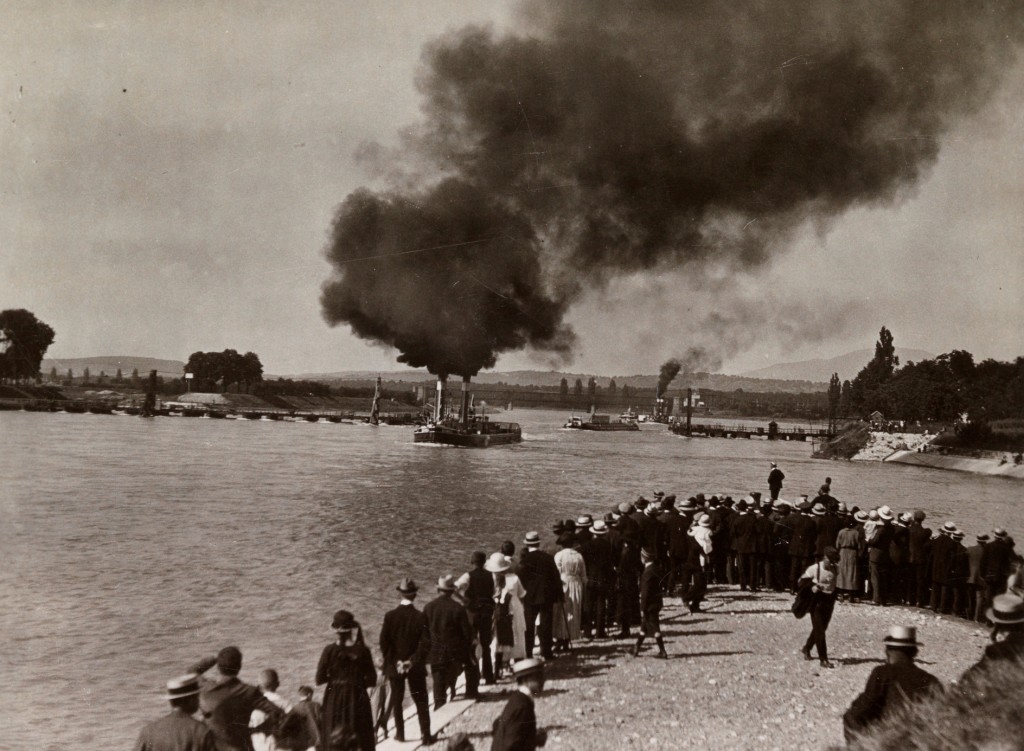 The overview map of Basel with the existing & projected port & railway facilities of 1917 (Fig. 1) documents the planning process for the construction of the Basel port facilities Kleinhüningen and Birsfelden. The map was published as an appendix to Ratschlag No. 2081 (State Archives of Basel-Stadt). The areas for projected port facilities are marked in yellow.  The overview plan of the Basel Rhine port facilities of the Schiffahrtsamt of the Canton of Basel-Stadt from 1924 (Fig. 2) shows the ports of St. Johann and Kleinhüningen. The detailed map contains the locations of the harbour cranes, railway tracks and warehouses and provides information on the type of goods handled.

The Port of St. Johann in Basel (Fig. 3) was built between 1906 and 1911. In this port, mainly grain and dry goods were handled and stored. In 2010, the port was demolished in order to make room for the Novartis Campus.

The harbour basin I of the port of Kleinhüningen (Figs. 4 and 5) was opened in 1922 and extended until 1924 with crane systems and buildings for the shipping companies. The message on the postcard (Fig. 4) reads: “[…] You can already see from the smoke that our seaport is of great importance, because without smoke, no (harbour) fire. […]“.

The harbour basin II of the port of Kleinhüningen was built from 1936 to 1939. Almost in the same period, from 1937 to 1940, the Rheinhafen Birsfelden, for which a large area had already been eliminated in the 1917 plan, was built and subsequently extended several times. Today, this port is focused on the handling and storage of liquid fuels and dry goods. In Kleinhüningen, in addition to containers, dry goods such as steel, aluminium, non-ferrous metals and liquid materials are handled.

The map of Basel’s Rhine port facilities of the Schiffahrtsamt with the signature K 402063 is 30 x 93 cm in size. 47 x 36 cm in size, the map of Basel with the existing & projected port & railway facilities has the signature K 481020. Both maps are part of the map collection and can be viewed in the reading room of the collections and archives. The photo and postcards can be found in the image archive online.