By their very nature, texts on alchemy are largely inaccessible, difficult to comprehend and often have an obscure edition history – and none more so than Heinrich Kunrath’s Amphitheatrum Sapientiae Aeternae. As Umberto Eco writes, while the posthumous Hanau edition of this work was
one of many, it is by far the most well-known. Heinrich Khunrath (1560-1605), a German physician, alchemist and Kabbalist, probably published a small print run of the book in Hamburg for a close circle of insiders in 1595. While the subsequent Hanau edition is still available in several libraries and collections to this day, there are only two known surviving copies of the first edition, which makes it extremely rare.

The copies of the Hanau edition are by no means all bound the same. In many cases, individual plates are missing and their order in the text varies from one copy to the next:

Sure enough, the plate with the owl that Eco is referring to here is missing from ETH Library’s copy, while the evidently somewhat rarer plate Feinde (“Enemies”) – this astonishing J.J. Grandville “avant la lettre” – is present: 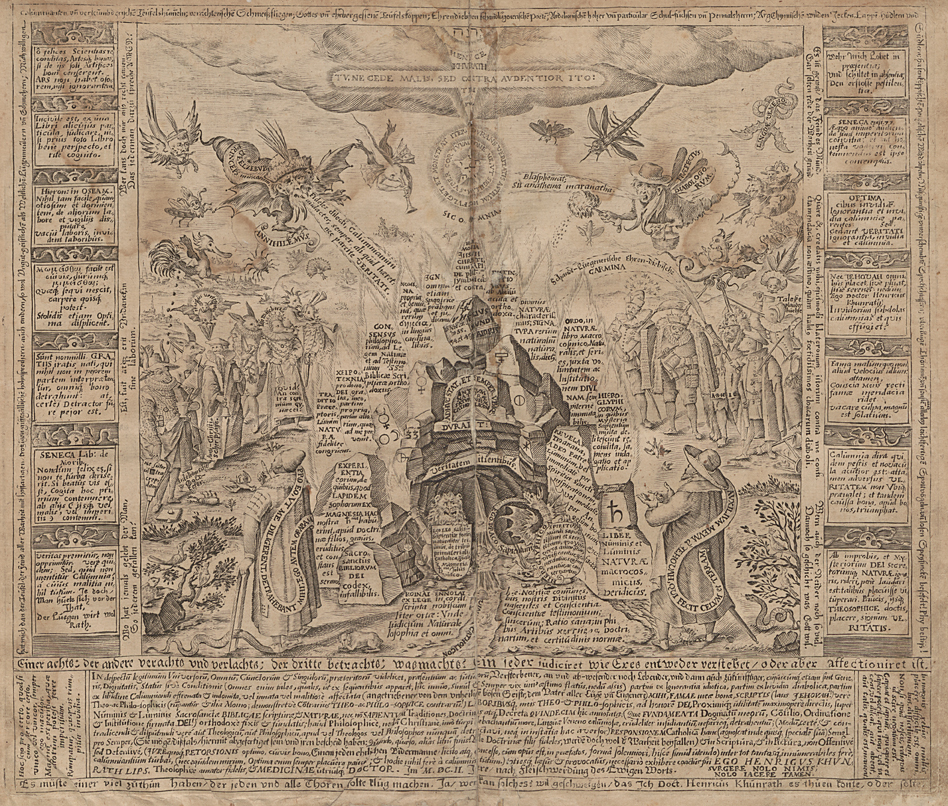 Feinde plate (Khunrath surrounded by his enemies, who, in true Grandville style, are depicted as birds and insects)

Even a wily bookworm like Eco concedes that he had his work cut out with the wealth of different editions of Amphitheatrum. Not only are there different collations of the Hanau and Hamburg editions, for instance; there are also several phantoms, which haunt the catalogues and literature in-between and after these editions.

In the true criminological style we know from Eco in The Name of the Rose, he ultimately attempts to clear up the confusion: in 1595, good old Khunrath wanted to cap his career with Amphitheatrum and had the round plates cut. By 1598, he had reached a stage where he could request the royal printing privilege. Four years later, he wrote and dated the epilogue, and had the cover engraved to save time. In the three years until his death in 1605, he issued instructions for the production of the rectangular plates. When he passed away, his friend Erasmus Wolfart took over and sent the work off to the printers, which was published in 1609 with a corresponding colophon. This was when things took a decisive turn: a) the printer Guillaume Antoine bound his edition with the complete existing plates and added the cover dated 1602; this was the moment Levinus Brauns, a shrewd book dealer from Magdeburg, had been waiting for: he had been sitting on a pile of covers dated 1608 for over a year, which he could now add to his delivery of the 1609 edition and “pre-date” it to avoid the risk of losing the royal printing privilege. Or hypothesis b): Levinus Brauns was the actual client and some rascal misused the Hanau copies by circulating them with the 1602 cover.

Whatever actually happened, the diversity of the Hanau edition remains a mystery. How come the owl is missing in some Hanau copies and the plate with the enemies in others? And why do the plates in the same edition appear in a different order? Eco concludes that each copy of the Hanau edition is probably unique. In all sixteen copies he compares, the plates are in a different order. An inspection of our copy reveals that the plates also appear in a sequence that cannot be found in any other copy: Cover, Portrait, Enemies, Christ, Adam, Rebis, Laboratorium, Designatio Pyramidum, Porta Amphitheatri, Adumbratio Gymnasii, Hypotyposis Arcis (Owl missing). Our copy must therefore be the only one of its kind in the world. 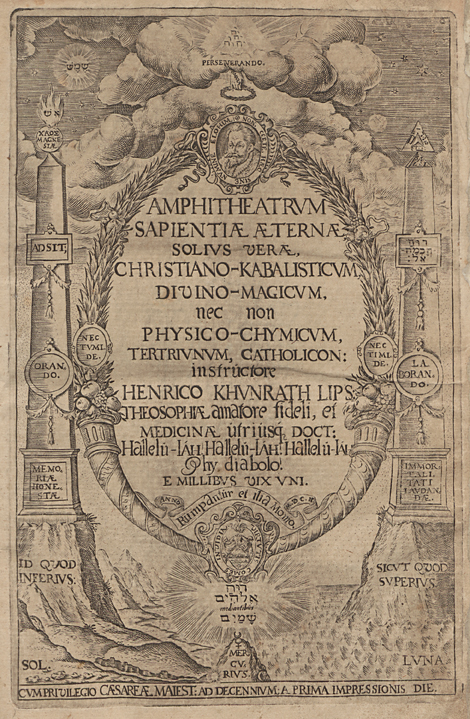 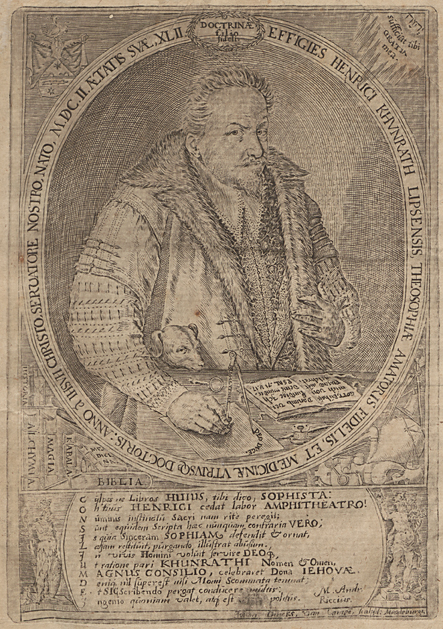 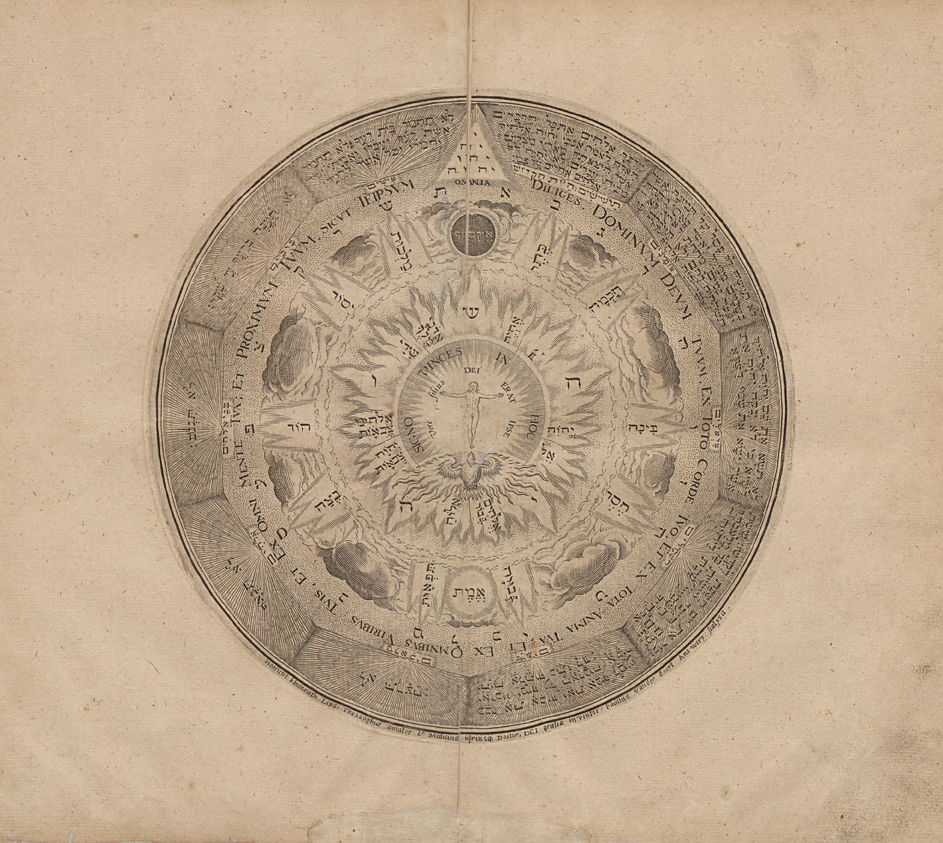 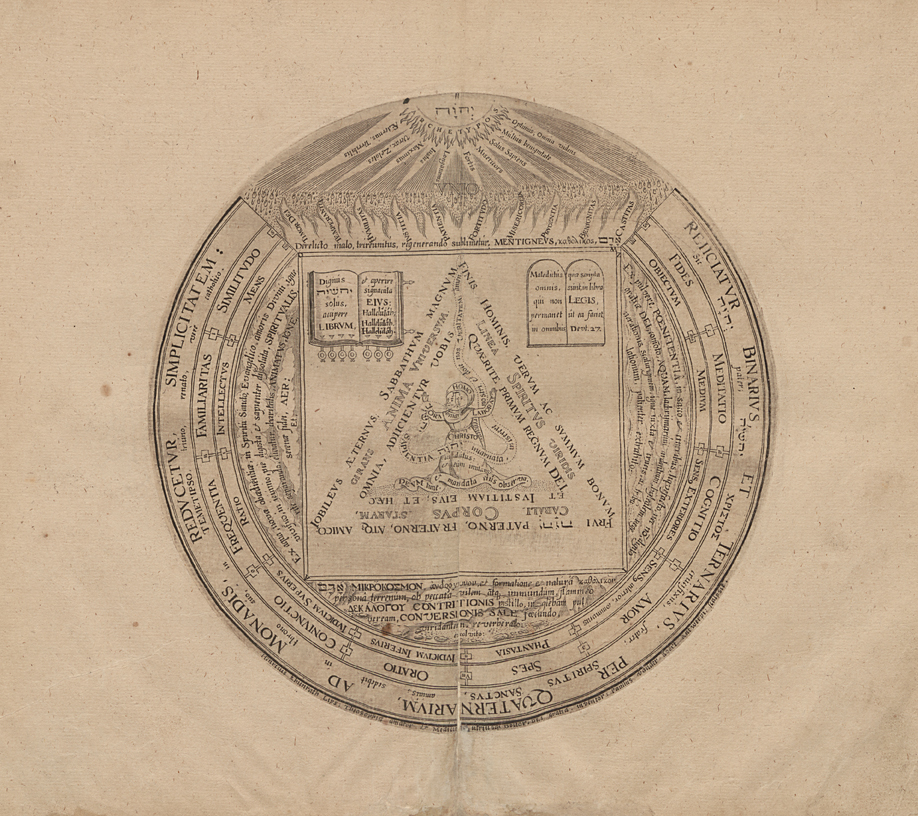 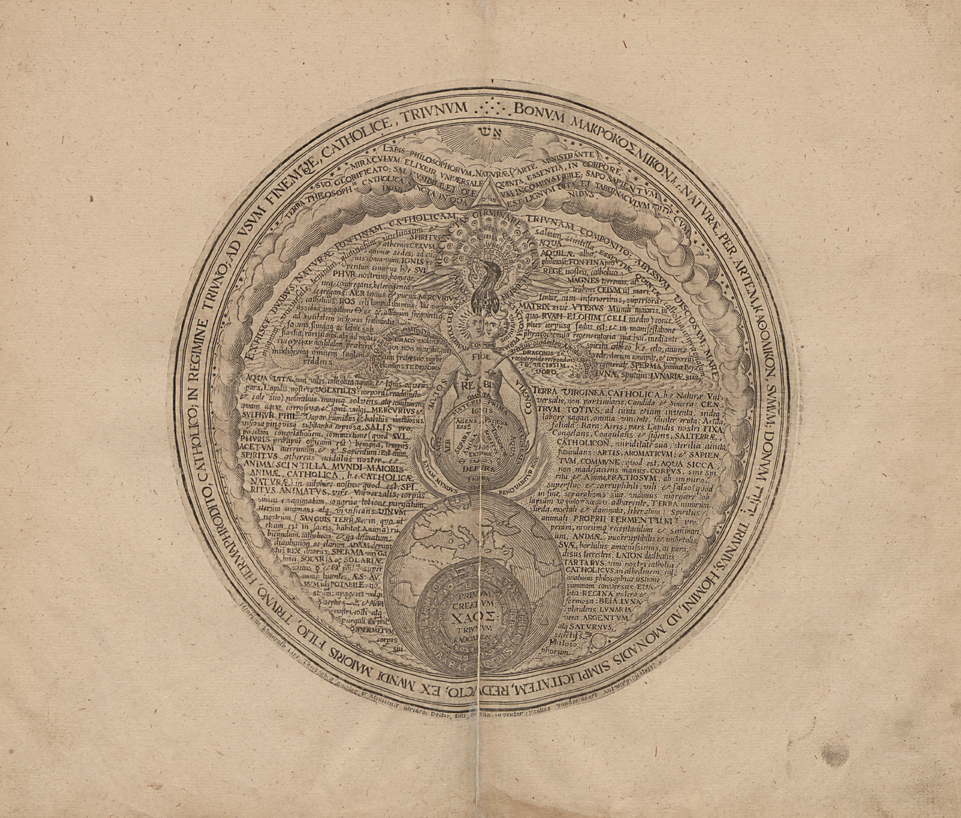 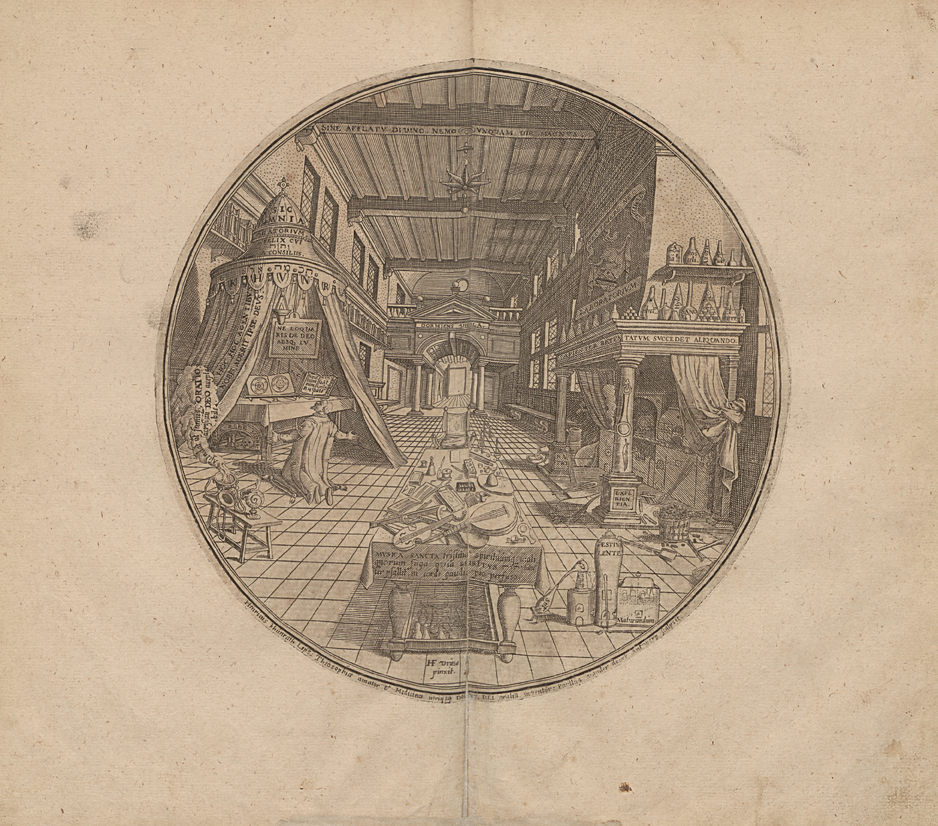 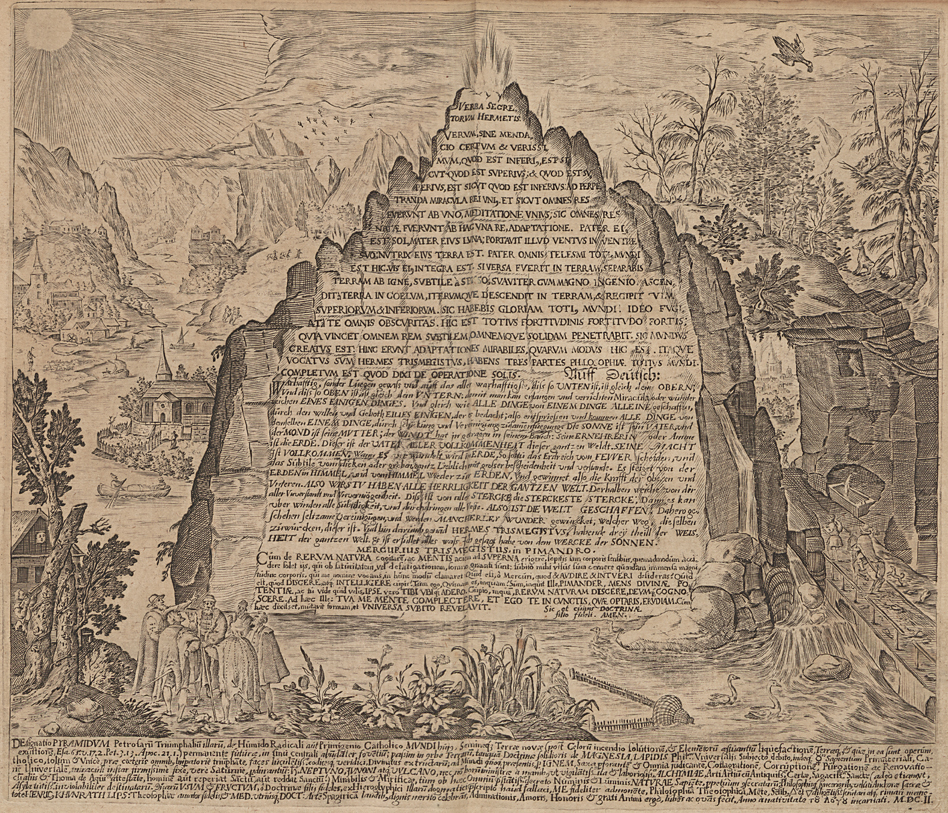 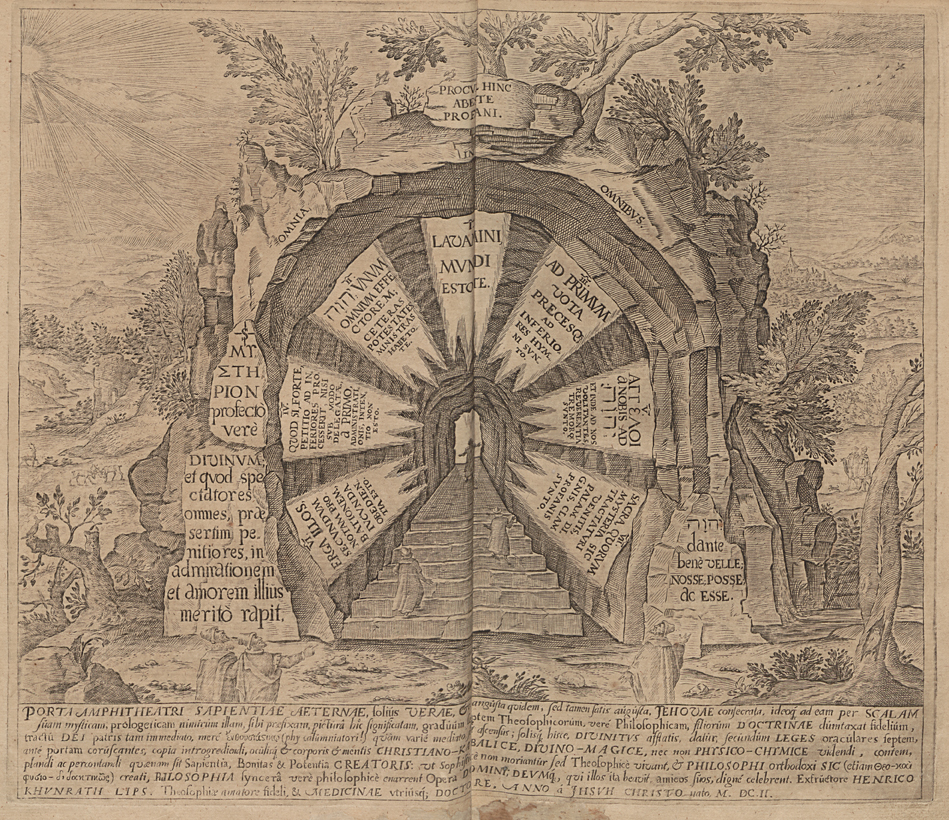 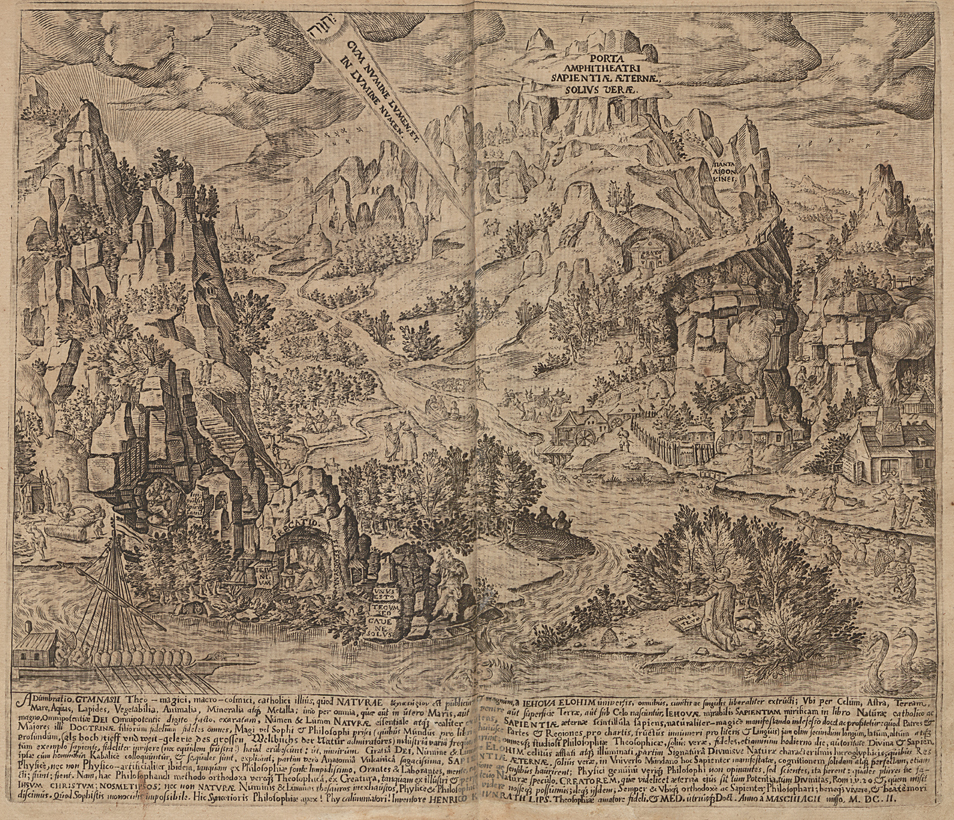 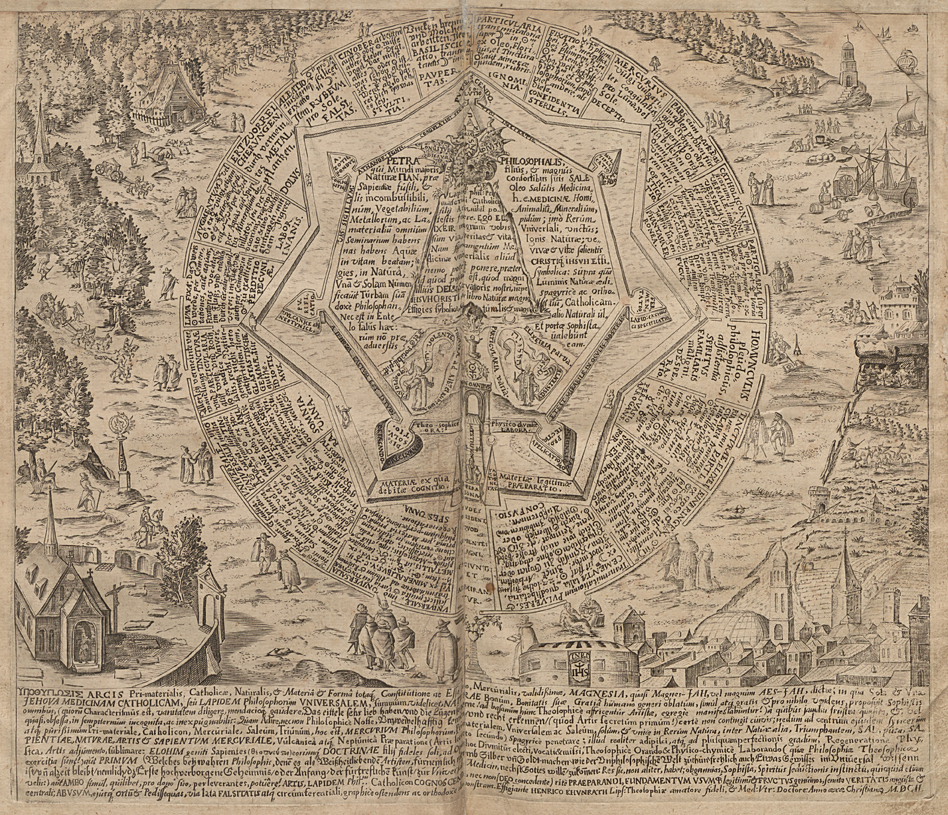 Khunrath’s Amphitheatrum in the library catalogue