The Musaeum hermeticum reformatum et amplificatum was published 1678 in Latin in Frankfurt. As the title suggests, this is the revised version of an earlier edition of Lucas Jennis, which was published in 1625 and is very rare. The Musaeum tries to assemble in a compact form the younger alchemists who do not figure in the major hermetic works such as Theatrum Chemicum or Bibliotheca Chemica Curiosa. While many authors remain anonymous in this compendium, there are well-known names such as Nicolas Flamel, Helvetius, Irenaeus Philalethes, Michael Maier, Michael Sendivogius and Basilius Valentinus. 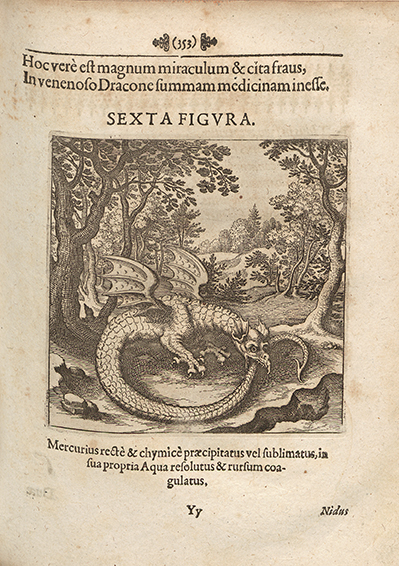 The high-quality engravings in this book, including the Ouroboros depicted above, are striking. According to Wikipedia, in alchemy this pictorial symbol stands for a closed and repeated transformation process of matter which is intended to serve to refine substances in heating, evaporation, cooling and condensation of a liquid. Accordingly, the description of the picture reads: “This is certainly a great miracle. That in a dragon is the great medicine. The mercury is precipitated or sublimated, dissolved in its own water and again coagulated.”

The edition of 1678 is online at Biblioteca Complutense Madrid: http://alfama.sim.ucm.es/dioscorides/consulta_libro.asp?ref=b19884941