The small island Isla Robinson Crusoe or formerly Mas a Tierra or Juan Fernandez is located in the Pacific Ocean, about 600 kilometers west of the Chilean mainland. It is part of an archipelago which was discovered in 1574 by the Spanish seafarer Juan Fernandez and later named after him. Its remoteness made it a popular hiding place for pirates in the past. From 1704 until 1709 the Scottish sailor and deserter Alexander Selkirk had been living all by himself on Mas a Tierra. Allegedly Selkirk’s story served Daniel Defoe as a model for his novel Robinson Crusoe (1719). It took until 1966 when the island was renamed after its famous fictitious inhabitant. 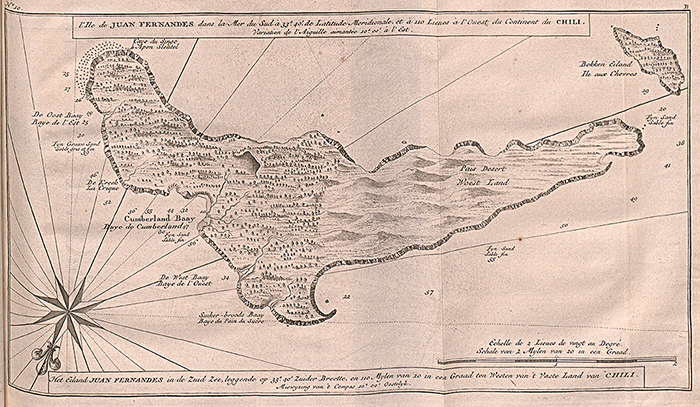 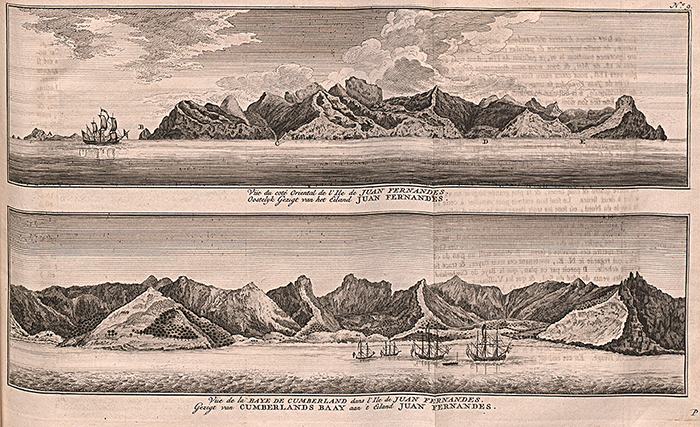 In the year 1740 the British Admiral George Anson dwelt on Mas a Tierra. The British were recuperating and fortifying themselves from a straining voyage around Cape Horn:

The excellence of the climate and the looseness of the soil render this place extremely proper for all kinds of vegetation; for if the ground be anywhere accidentally turned up, it is immediately overgrown with turnips and Sicilian radishes; and therefore, Mr. Anson having with him garden seeds of all kinds, and stones of different sorts of fruits, he, for the better accommodation of his countrymen who should hereafter touch here, sowed both lettuces, carrots, and other garden plants, and set in the woods a great variety of plum, apricot, and peach stones (Sutcliffe, p. 67) .

Like formerly Selkirk, Anson and his companions found rich nourishment and fresh drinking water. There were no dangerous or poisonous animals and – unlike as in Robinson Crusoe no cannibals and no “Friday”. After only a short time the British were strong enough to engage in skirmishes with the Spanish fleet.

To this day Crusoe Island has not lost any of its magical appeal. In 2005 a Chilean protection company informed the public that by means of metal detectors they had discovered several tons of jewels and gold with a total worth of about ten billion dollars. Like in the novel Treasure Island of Robert Louis Stevenson (1883) this treasure had originally been buried by a sailor in the year 1715. Legend has it that a British sailor had discovered it and then buried it again in another spot.

Thomas Sutcliffe: Crusoniana; or, Truth versus Fiction, elucidated in a history of the Islands of Juan Fernandez (Manchester, 1843)