Among the earliest engravings made by the young Albrecht Dürer (1471-1528) is commonly counted an image known as Unequal Lovers. It shows an old man and a much younger woman who have settled down together in a far reaching landscape. 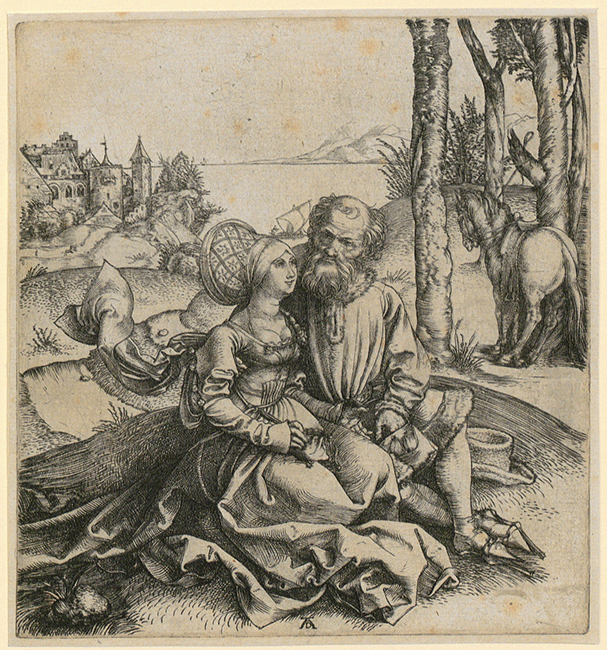 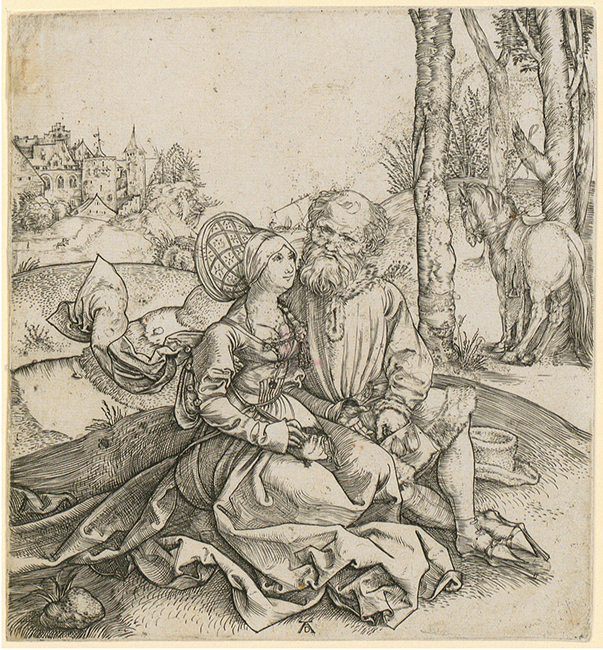 It has been suggested more than once that this print represents the Biblical story of Judah and Tamar (Genesis 38, 14-18), in which Tamar, after the death of her evil husband Er, seduced her old father-in-law Judah in order to continue the family line. Another suggestion is that it forms a representation of the wealthy Berthold Tucher and the much younger Anna Pfinzing, who supposedly got married in 1364 in Dürer’s hometown Nuremberg. But, when bearing in mind the prevailing image culture at the end of the fifteenth century, there is a much more likely answer to our question: a more general theme of ‘unequal lovers’ (also referred to as unequal, ill-assorted or ill-matched pairs/couples).

The tradition of this theme goes back a long way: the earliest known example in literature dates from 184 BC by the Roman poet Plautus. In the fifteenth century, unequal couples are increasingly depicted in the visual arts. The rapid development of the medium of print offered the opportunity to share a representation of this theme with a wide audience, and the first example in graphic art can be found around 1475 in the work of the Master of the Amsterdam Cabinet (aka The Housebook Master). 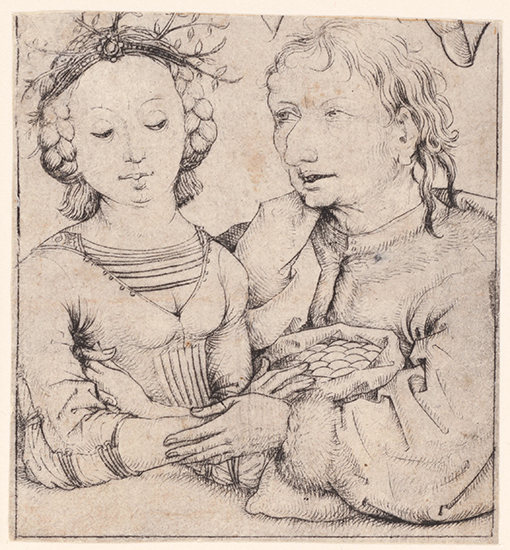 Depictions of unequal couples usually show an old man with a beautiful young woman, but the other way round also occurs. The depictions almost always suggest that such a relationship is not based on real love, because the people involved are either only interested in the money or the youthful body of the other. This is often portrayed quite literally, as it is by Dürer: while the older man’s right hand is firmly clasping the beautiful young woman and is about to touch her breasts, she has already opened her small purse to receive coins from his money pouch.

Presumably, this kind of image was meant to convey a moralising message, for both sexes: it was considered reprehensible for women to sell themselves in this way, while old men were considered foolish for believing that beautiful young women were sincerely interested in them.

The monogram as an indication for dating the print

Although Dürer’s print Unequal Lovers is undated, it is generally assumed that it was one of the first engravings he ever made. A first hint to this is the artist’s monogram. This was not the same throughout Dürer’s life but developed over time. Whereas his ‘final’ monogram is a Latin capital A with a flat top containing a capital D, this was not initially the case. For example, in the print The Holy Family with the Dragonfly, which is dated slightly earlier than the Unequal Lovers, Dürer still uses a Gothic instead of a Latin d. The monogram in Unequal Lovers builds on this to some extent, so that the legs of the A still meet in a point, but the d has been changed. Only at a later point in time Dürer made use of his ‘definitive’ monogram, in which the legs of the A are pushed apart. 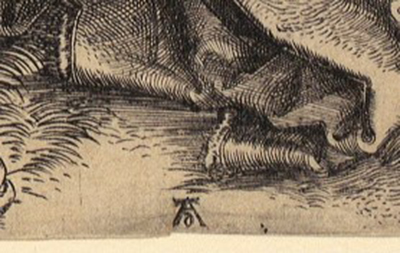 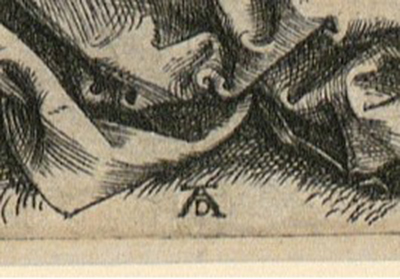 Multiple revisions of the plate

Dürer printed several states of this print – that is, he reworked the copper plate several times during the creation process and documented each of these work steps by printing impressions of the respective stage. In the first state, for example, the mountains in the background are still clearly visible, whereas in the second state they have already been greatly modified. Then, in the third state, the landscape is completely absent and the plate has been polished smooth.

The Graphische Sammlung ETH Zurich owns a print of both the first and the third state. This not only makes it possible to study the difference between these states, but also shows how a plate wears during the printing process: The lines in the impression of the third state are less dark in colour than the deep, clear lines in the first state. The juxtaposition of these two impressions gives us a wonderful insight into the working method of the still young artist, who was in his early twenties when he made this print.

Compared to the prints of his contemporaries with this theme, in which often only the figures are depicted, it is striking how extensively Dürer has depicted the scene. In this way, the artist gives us much more than a simple depiction of a foolish love affair. In just 15 by 14 centimetres, Dürer thus hints at a larger story. His extensive depiction offers the viewer opportunity to further imagine the story themselves. Would the old man live in one of the houses in the city to the far left? If so, that could mean that this meeting, far beyond the city walls, was a secret affair. The horse tied to the tree on the right could confirm this; the man must have ridden it here to meet his young lover, only to leave with an empty money pouch a while later. 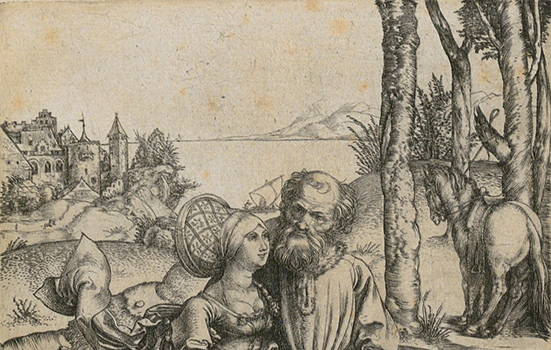 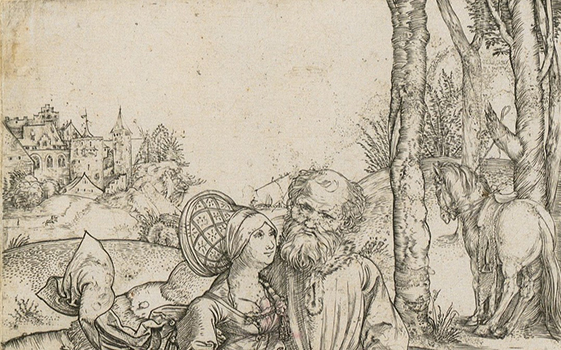