They acted as a kind of copyright and were supposed to protect publications against unlawful reprinting by third parties: printer’s marks, also referred to as printer’s signets. They were added to books by the first publishers of printed material to label their source clearly. As there was no binding copyright in the 15th and 16th centuries, however, the marks developed into an increasingly important part of book decoration. And they also constituted a kind of key to the book by enabling a form of quality seal for those in the know. After all, the signets stood less for their artistic quality (even if the example displayed here stems from Hans Holbein the Younger) than for the quality of the published product. So whether one opted for a book from a certain publisher also depended on the meaning of his printer’s mark. Moreover, it also revealed a publisher’s standing among his competitors and his affiliation to a particular academic circle. 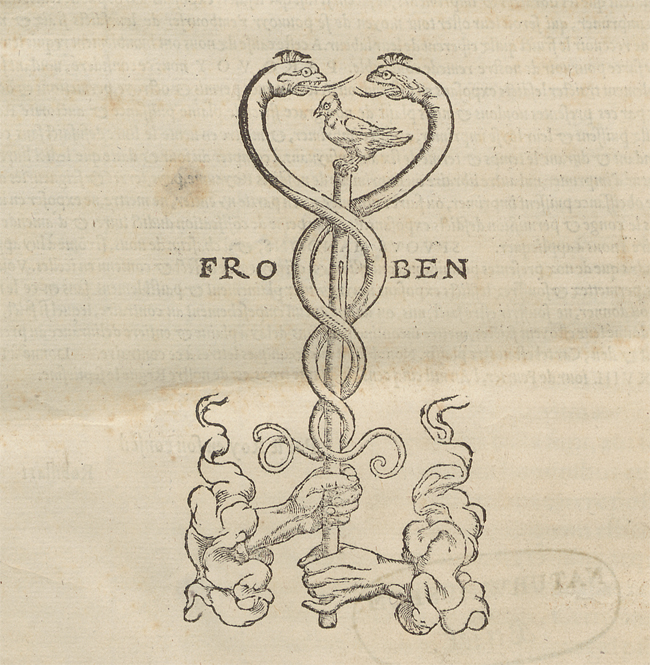 Since the year 1515, Johann Froben had been using this printer’s mark, featuring the caduceus of Mercury or Hermes entwined by serpents and with the enthroned dove, the two snakes winding upwards and the hands clutching the staff as an allusion to the Bible verse from the Gospel according Matthew, “Be ye therefore wise as serpents, and harmless as doves.” But what could have prompted Froben to hire Holbein to design his signet with this classical and biblical motif? Froben was famous for his painstakingly edited editions of both ancient classics and the New Testament. From 1513 he concentrated fully on academia, blossomed into one of Basel’s most important printers and became the beating heart of German humanism. He also edited texts by Erasmus of Rotterdam, whom he had befriended. This content-based orientation, coupled with the quality of his work in what was known as the “black industry”, enjoyed international renown. Nevertheless, according to his son, he bequeathed “more fame than money” to his family after his death. Perhaps this fact explains an inclination towards religious mysticism and thus the Bible verse as the motivation behind the choice of motif for his printer’s mark.  “Be ye therefore wise as serpents,” i.e. crafty and cunning, perhaps also in the sense of “on one’s guard”, and at the same time “harmless as doves”, i.e. innocent and trusting.  Trust in the quality of Froben’s work?! Prudent in one’s choice of publisher and printer?! The Latin-Greek version of the New Testament in the edition by Erasmus of Rotterdam was also published by Froben in 1519. On the other hand, antiquity played a significant role in Froben’s life as a printer and the caduceus with the entwined serpents symbolised commerce for the ancient Greeks. One thing is for certain: the choice of signet will have been calculated and carefully considered, given that the printer’s marks effectively constitute the first key to the book!

The figure here stems from Rar 3119 and can be viewed digitally. Other 16th-century works from Froben’s printing company are available on the Knowledge Portal via the platform e-rara.ch.