The widely travelled American writer Truman Capote spent several times in Switzerland during the 1950s and 1960s. The photograph shows him on arrival in Zurich Kloten, presumably in 1956. 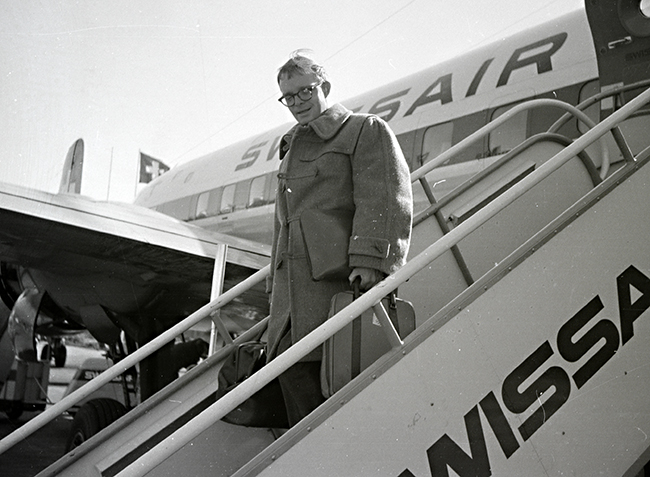 Unfortunately, the photographer of the agency Comet did not think of the archive staff who would manage his photos in the distant future. Thus, the cover with the negatives only says: “Truman Capote in Klosters + Zurich/Gerber/Negative Index No. L5/48”. We now know at least the name of the photographer (Hans Gerber) and, based on the numbering of the negative bag, we can define 1956 as the approximate year of origin of the picture. However, the exact purpose of Capote’s journey to Zurich remains hidden.

Gerald Clarke’s extensive Capote biography does not contain any specific reference to Capote’s stay in Klosters in 1956, but Clarke mentions several visits to Charles Chaplin and Oona o’ Neill in Verbier between 1953 and 1973. The year in question 1956 was particularly fraught with travels. On 19 December 1955 he travelled from Berlin via Leningrad to Moscow, where on 10th January he attended the premiere of George Gershwin’s Porgy and Bess. At the end of February he returned to New York, so he could well have made a trip to Zurich and Klosters in the meantime. From New York he left immediately and went to Venice, where he stayed with Peggy Guggenheim. He was back in Manhattan at the beginning of May and already in mid-June he temporarily moved his household to the sea in Stonington (CT). The year ended with a longer trip to Japan, Hong Kong, Thailand and Cambodia.