During his stay in Copenhagen in September 1958, the Comet photographer Hans Gerber took pictures of the famous Grundtvigskirche and in its interior with a model ship hanging from the ceiling. 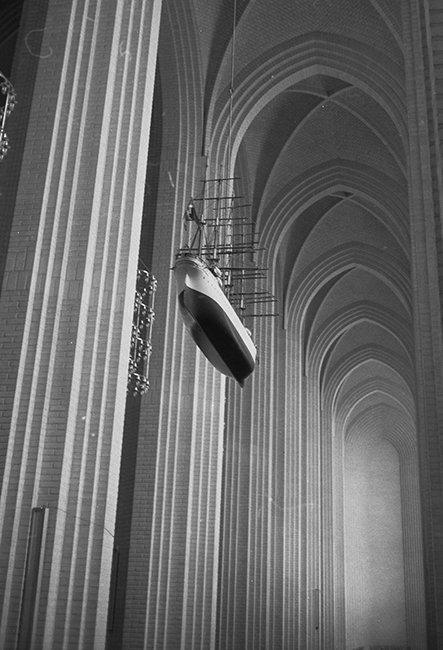 Similar “installations” are mainly known from southern Europe, for example from the Notre-Dame de la Garde in Marseille, where a large number of ships adorn the church interior. The”flying” models of ships are reminiscent of the many seafarers who have landed safely in port again after an emergency situation on the high seas. They often vowed during a violent storm to give God a gift if they would survive and did so out of gratitude and in a form reminiscent of misfortune. There is not much to learn online about the ship in the Grundtvigskirche. As with the ships in Marseille, it is a votive ship.

Jan Scherping has put together an extensive website on votive ships from all over the world. One learns, among other things, that there is an extraordinary wealth of them in Denmark.