Many rare books have had a long and exciting journey on their way to a safe haven in a library. These works have for example seen continuous change in ownership and travelled through many countries over the centuries. The fate of these ‘travelling books’ has often been documented: thus handwritten notes, stamps and labels have assumed the role of storyteller, in many cases leaving unsolved mysteries in their wake.Five years after the death of Pierre de Fermat (1607–1665), the most important mathematician of the first half of the 17th century, his son Samuel (?–1690) published this work. Publication of Fermat’s Last Theorem meant that the work has enjoyed immortal renown in the history of mathematics. This was also the reason why the work has been so carefully stored and looked after over the centuries. 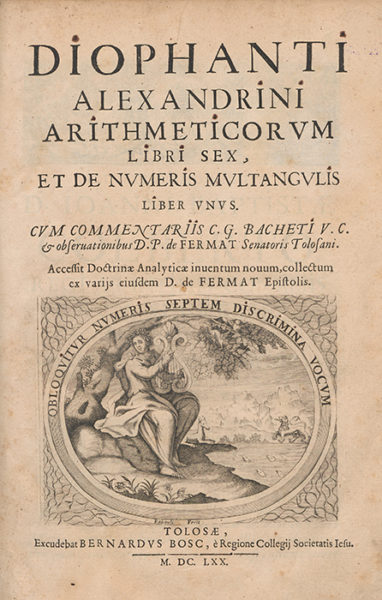 This copy is now a good example of the twisting paths of ‘travelling books’. This precious work was acquired at an unknown time by the Collège du Plessis-Sorbonne and, in keeping with a long tradition, awarded as a prize to a scholar of the college who has remained unknown to us. The Collège du Plessis was founded in 1323 by Geoffroi du Plessis-Balisson and in 1642 was brought under the administrative control of the Collège de Sorbonne by Cardinal Richelieu (1585–1642). Until the French Revolution it was known by the name of the Collège du Plessis-Sorbonne. During the time of the Terror, it was turned into a prison. As the college’s only known ex libris, a monogram of intertwined ‘PS’ initials can be made out on the binding. Surrounded by royal lilies and a laurel wreath, the monogram was tooled in gold as a supralibros on the work’s luxurious binding. 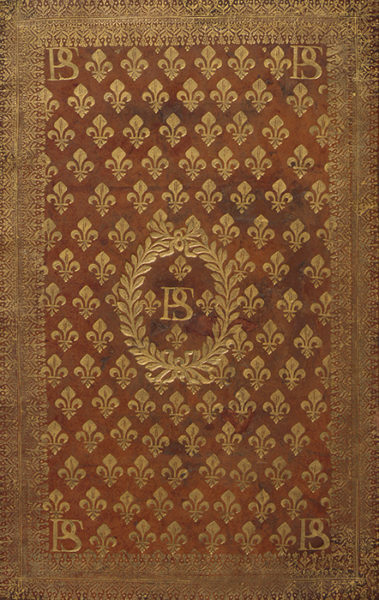 As the label on the reverse of the front cover testifies, the work later made a stopover in the Courcier bookshop, which Victoire-Félicité Courcier had inherited from her husband in 1811 and continued to run until 1820. 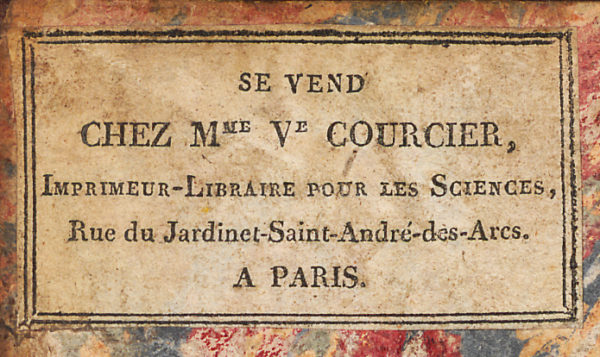 Unfortunately it is no longer possible to reconstruct who bought it in the bookshop. The stamp with the inscription ‘Sacré-Cœur Conflans’ on one of the book’s pages helps us when reconstructing its onward journey. The handwritten entry ‘151’ can easily be made out in the middle of the owner’s stamp. This stamp tells us that this time the work not only underwent a change in ownership but also left Paris. It now came into the care of the Benedictine convent of the ‘Sœurs de Sacré-Cœur’. In 1841 the Benedictine nuns had taken over the old convent in Conflans, now a district of Charenton-le-Pont, which remained in their possession until 1911.

The fate of the work cannot be retraced after 1911. Because of its special significance for the history of mathematics, the work was acquired in 2006 by a French antiquarian bookshop and so found refuge in the ETH Library; this is how the long journey ended.

Comparable book stories can be traced visually on the E-Pics platform in the new catalogue at ‘Ex meis libris’: Provenance of Rare Books.

For the history of the Benedictine convent ‘Sœurs de Sacré-Cœur’, see: http://www.culture.gouv.fr/public/mistral/merimee_fr (27.02.2018)