Today, 125 years ago on 23 February 1893, Rudolf Diesel received the patent for the diesel engine in Berlin. What is interesting from a Swiss point of view, is the connection between Rudolf Diesel and Maschinenfabrik Sulzer AG in Winterthur, where the young inventor had already completed two internships.

On May 16,1893, Rudolf Diesel and Gebrüder Sulzer entered into a cautious agreement on the exploitation of his patent. Gebrüder Sulzer paid a down payment of 10,000 Reichsmark (approximately CHF 400,000 after today’s value) and paid a further 20,000 Reichsmark annually until the start of its own engine production. Diesel undertook to hand over all drawings and results requested by Gebrüder Sulzer that were obtained with the test machine in Augsburg (Zehnder, p. 2). 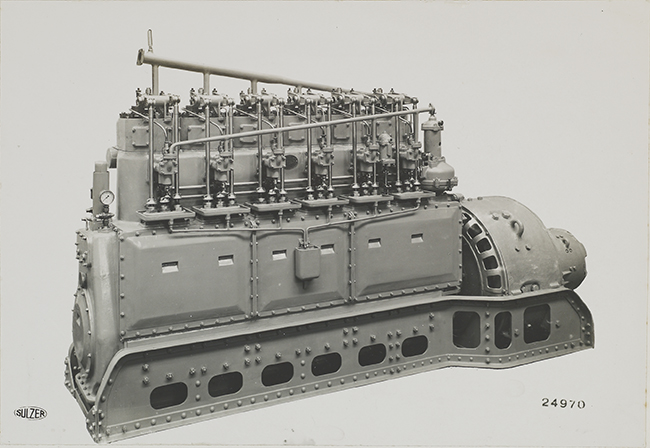 At a time when Sulzer was still building large numbers of steam engines, the launch of a new engine type was a difficult undertaking. Nevertheless, the first Sulzer diesel engine was put to the test on June 10, 1898 and the first engines were delivered in 1903. Despite the diesel engine’s success story, Diesel also suffered setbacks and ran into health and financial difficulties:

On 29 September 1913 Rudolf Diesel disappeared from the ferry during the crossing from Antwerp to Harwich. He was to attend the inauguration of a new factory for diesel engines in England. The evidence suggests that he committed suicide at the age of 55 in a financial situation that seemed hopeless to him (Zehnder, p. 4).

Rudolf Diesel has dealt with both technical and social problems. His work Solidarismus: Natürliche wirtschaftliche Erlösung des Menschen (1903) with its concern of human self-determination represents the departure into a “humane” modernity.