Few natural phenomena are as spectacular to the observer as the aurora with its arcs of light. While it was known in antiquity as band of fire, beam or opening, metaphorical expressions prevailed in the Middle Ages such as fiery lances or burning red. It is now believed that the Zurich-based polymath Conrad Gessner (1516–1565), in addition to many other findings, gave us the first fact-based description of the aurora. With its current designation aurora borealis, the northern lights were first mentioned in the seventeenth century in a famous footnote, for more than four centuries falsely attributed to the French natural scientist Pierre Gassendi (1592–1655). This theory was first refuted in the 1970s and Galilei Galileo (1564–1642) was accepted as the author. Until science had revealed the cases for the ‘mysterious play of light’, the northern or polar lights were for centuries regarded with fear and anxiety and seen as something ghostly and supernatural. 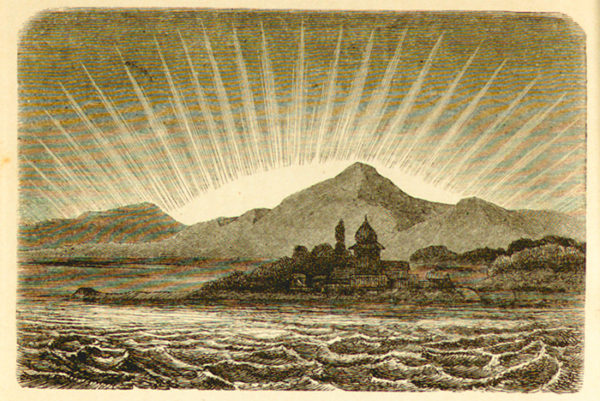 The decisive breakthrough in research into the aurora phenomenon occurred in the second half of the nineteenth century. At the newly founded Federal Polytechnic, the astronomy professor Rudolf Wolf (1816–1893) and the geophysicist Hermann Fritz (1830–1893) established auroras as a specific area of research. The two pioneers collaborated closely on research into auroras, with Wolf making his research data available to Hermann Fritz. 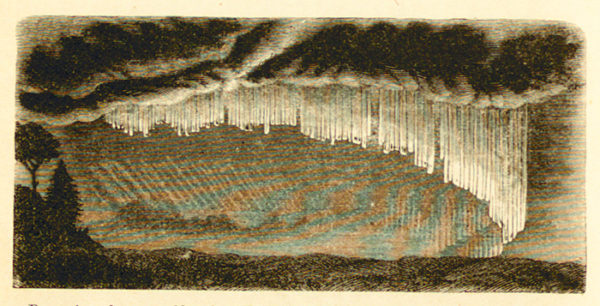 Hermann Fritz was titular professor of General Machine Research at the Federal Polytechnic, at the same time pursuing research into the northern lights. In 1873 he published his observations in a ‘Verzeichnis beobachteter Polarlichter’ (‘List of polar lights observed’), an important work still consulted to this day. Professor Fritz also continued to focus on this area and published his research and observation results in 1881 in the comprehensive monograph ‘Das Polarlicht’ (‘The polar lights’). His observations showed, among other things, that auroras occurred in drapery or mantle form. Fritz is also credited with devising the specialist term ‘isochasm’, a compound of the Greek words iso (same) and khasma (gaping hollow). An isochasm is a line connecting places with the same frequency of auroras, making it possible to show the distribution of northern lights on a map. 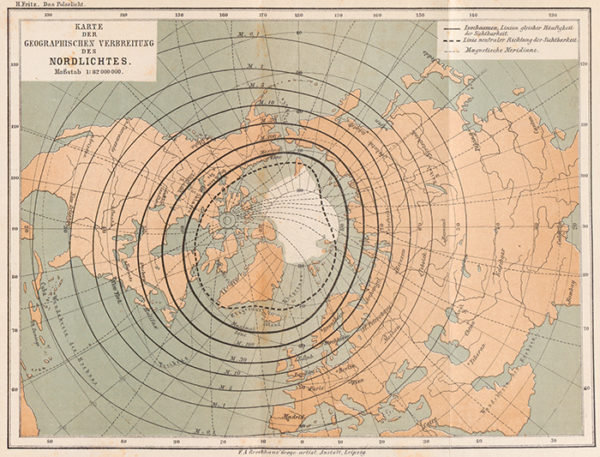 Map of the geographical distribution of the northern lights, from Hermann Fritz: Das Polarlicht, Leipzig 1881.

In the ETH Library holdings can be found a precious example of the first edition of Hermann Fritz’s work, with a handwritten dedication to Rudolf Wolf: ‘Herrn Prof[essor] Dr. R[udolf] Wolf / freundschaftlichst vom Verfasser’. Other works formerly in the possession of the first director of the ETH Library have been brought together on the e-rara.ch platform in the new collection ‘Rudolf Wolf Private Library’.