The Swiss animal catcher Peter Ryhiner (1920-1975) had christened the blue-eyed python Serata (Sanskrit for “beauty”) and brought it from the vicinity of Kolkata to the USA and later to Switzerland. The picture was taken by a Comet photographer on the occasion of the opening of the travel agency Jacky Maeder at Sihlstrasse 38 in Zurich. 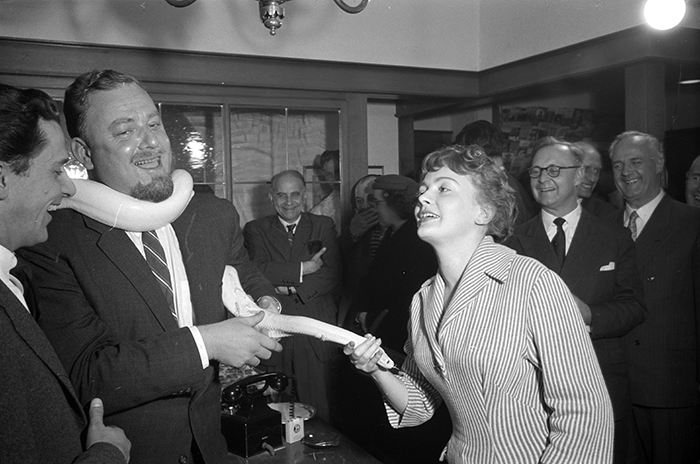 Following the performance at Jacky Maeder’s “… Ryhiner exhibited his white snake for a few weeks at the Café” Tropic “in Basel with his friend Paul Seiler (Honegger, p. 84).” In New York Ryhiner had also hosted regular “Python Parties” before. This is what the New Yorker wrote on October 22, 1955:

“We went to a cocktail party for a snake the other afternoon, and had an interesting time. The guest of honor was a seven-foot white python, named Serata, that Peter Ryhiner, A Swiss animal collector who operates in India, recently brought to this country from East Bengal. The party was held in the office of Hugo Mayr, general manager of Swissair, in Rockefeller Center, and the snake, accompanied by a fellow- python – an ordinary mottled-brown one – received guests while reclining in an open crate. Its owner, a thirty-five-year-old man with a brown beard, informed us that his pet is unique. “Serata is not an albino,” he said. “Albinos have pink eyes and are pigmentless. Serata has dark-blue eyes and white pigmentation. I think he’s a male but he’s only five years old, which is too young for a python’s sex to be determined. He’ll grow to at least seventeen feet and live maybe thirty years (S. 33).”

Ryhiner rejected several bids from zoos for the animal, including one of 7,000 dollars. He wanted to either use the snake for advertising purposes or sell it to a crazy Hollywood celebrity for an extremely large sum of money. Ryhiner knew that in Eastern mythology white pythons were considered reincarnated deities:

Serata died in 1961 at the Zurich Zoo from severe parasite infestation. Ryhiner also experienced a tragic end. At the beginning of the sixties, when new wildlife laws came into force and zoos increasingly exchanged animals with each other, he got into a crisis. After several unsuccessful attempts, most recently as a safari companion in Kenya, he returned to Switzerland impoverished, where he took his own life in 1975 at the psychiatric clinic of Préfargier (cf. Honegger, pp. 84-85).