On 27 August 1883 the volcano known as Krakatoa, itself part of an island archipelago of the same name, was destroyed in an enormous explosion. The detonation’s blast is said to have been heard thousands of kilometres away, sending shock waves round the world several times. 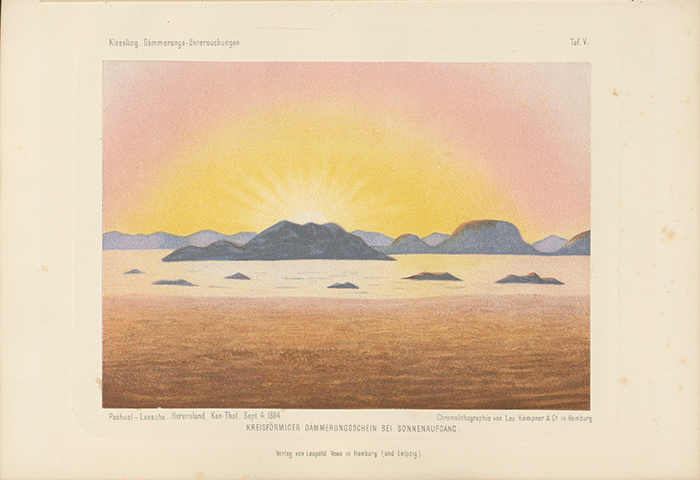 The vibrations in the water and the atmosphere were so powerful that their effects could be felt on the entire surface of the world. Experts later calculated that the detonation must have been at least 10,000 times stronger than the atomic bomb dropped on Hiroshima. Powerful tsunamis were unleashed. Waves up to 40 metres high rolled over the island’s coasts, devastating towns and villages. Pyroclastic flows raced across the sea at 800 km/h and only came to a stop when they hit the mountains on the island of Sumatra. Huge quantities of volcanic ash and rock were blown into the atmosphere. More than 36,000 people perished in this disaster. ‘And then there were these wonderful sunsets, which felt almost unreal, and they seemed to have the consequence of sending people into raptures.’ Thus did the Norwegian artist Edvard Munch receive inspiration for his famous painting The Scream from the magnificent twilight effects near the North Cape. When he built his artificial cloud chamber, the British scientist C.T.R. Wilson was also said to have been influenced by findings on the effects of the Krakatoa eruption in 1911. 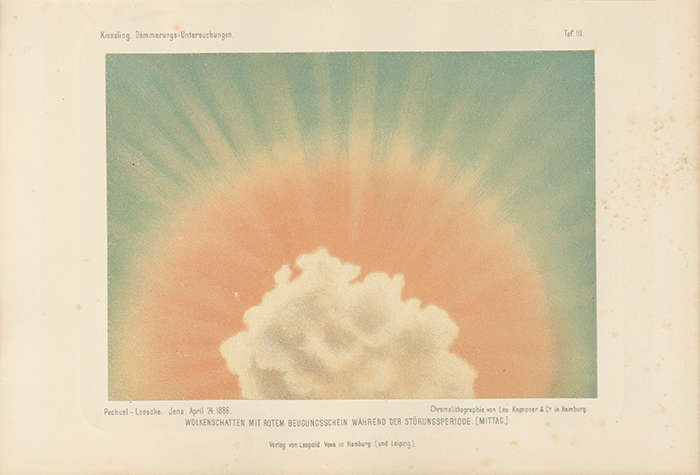 Various scientists subsequently attempted, using investigations and observations, to explain the phenomenon and the connection between the volcanic eruption and the sudden increase in atmospheric and optical disturbances. A number of European scholars independently suspected that the twilight effects also observed in higher latitudes might be due to the quantities of smoke carried up into the air when the volcano erupted. For the science of that time, it was no coincidence that there was a connection between the sumptuous ‘evening glows’ observed in Europe and similar richly coloured phenomena seen at the same time in India and that these events were caused by this volcanic eruption in the Indian Ocean, unprecedented until then on such a scale. As such, it was also possible to rely on observations from earlier times. But it has never been validly proven that the richly coloured phenomena were actually caused by particles of volcanic origin.