Precious letters from the early days of the psychoanalytical movement online

Both correspondents are luminaries and their importance for clinical psychology is vast. We are talking about the founder of analytical psychology, Carl Gustav Jung, and Sigmund Freud, the father of psychoanalysis. From 1906 they spent seven years communicating regularly on a personal and academic level – until they parted ways in 1914. 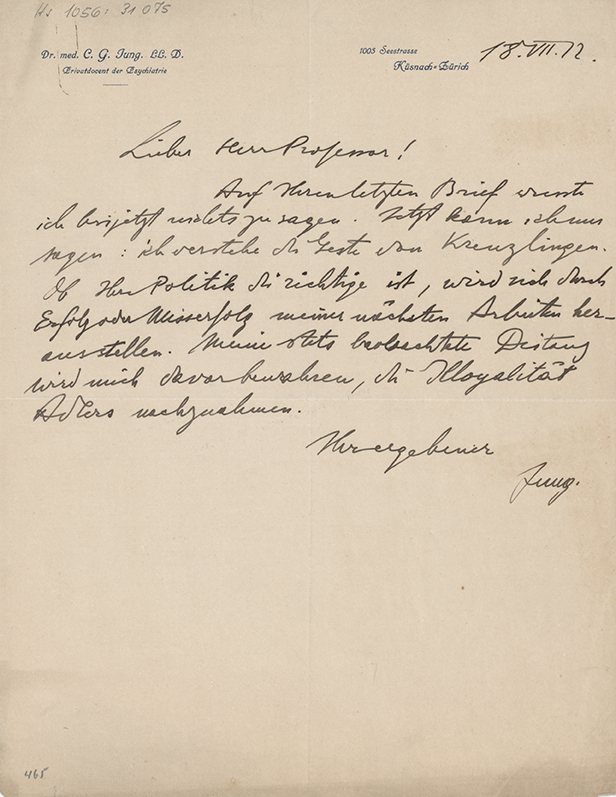 Available in the original

The original letters from Carl Gustav Jung to his initially fatherly friend and eventual rival Sigmund Freud are curated by ETH Zurich University Archives. Thanks to their digitization, speech and counter speech between the two psychiatrists, the electric vigour and sober disenchantment, the event-related exchange and expert assessment, can now be read on the internet. The more than 190 handwritten letters penned by Carl Gustav Jung from his scientific papers are accessible online via e-manuscripta.ch. By courtesy of the Foundation of the Works of C.G. Jung, the University Archives is thus able to supplement the archival data of Jung’s academic correspondence, which was launched in the spring 2017, and create direct access to the content of the highly regarded letters. At the same time, this initiative complements the one launched by the Library of Congress in Washington this year to digitize the Freud letters.

The testimonies to the fruitful yet difficult discourse between the two psychiatrists were already edited in 1974 and published as an American edition by Princeton University Press and in German by S. Fischer-Verlag. It was the explicit will of the two sons, that the letters should be treated as historical documents.

It is obvious that the letters that can now be viewed as exact copies of the originals on the platform of handwritten sources already have a longer edition and holding history. Despite a chequered world history, a personal rift between the rivals and Jung’s subsequent assessment as of little direct importance, the correspondence reveals a welcome permanence to academia.

Originally, Carl Gustav Jung’s letters had been part of Sigmund Freud’s personal papers  that were put aside and saved for later. Today, however, the letters are kept in Jung’s personal papers and not, as is usually the case, with the recipient, Freud, who kept up an extensive correspondence with academics and whose complete personal papers are also archived. At first the letters to Freud had been arranged chronologically by addresser in filing cabinets in his study in Vienna. Freud had also added “a few congress programmes and circulars to the local groups” and several letters from Jung to Sandor Ferenczi, who had given them to Freud, to the bundle of Jung letters. A much later letter by C.G. Jung concerning the question of a patient’s move to Vienna was also placed in this folder. The circumstances surrounding Freud’s escape to London in 1938 had an impact on the subsequent record situation and thus the history of the letters published here. The papers taken to Freud’s house in London in 1938 were accommodated but their historical context could not always be maintained. For instance, the letters from C.G. Jung to Freud were long deemed lost until they were discovered by his daughter Anna Freud in 1954. In 1969, in the wake of various endeavours to publish them, a proposal was made to exchange the letters between the Freud and Jung families.

In his introduction to the 1974 edition, the publisher of the Freud-Jung correspondence, William McGuire, describes the circumstances and precise course of events. In February 1970 Franz Jung flew to England with the original Freud letters and visited Sigmund Freud’s son. During the meeting, Ernst Freud and Franz Jung exchanged their fathers’ letters and discussed editorial basic conditions for their publication. Thus, the Jung letters came to Switzerland and were entrusted to the C.G. Jung Institute. The substantial C.G. Jung Papers Collection was bequeathed to ETH Library by Jung’s heirs in 1977. In 1998 the C.G. Jung Institute had to sell Jung’s letters to Freud, which were purchased by ETH Zurich and incorporated into the C.G. Jung Papers Collections.

An entire age was influenced by the psychoanalytical movement. The online publication of the ETH Zurich University Archives offers a prime opportunity to study the letters for the first time or afresh and evaluate them academically.