The blue and white trams are as much part of the Zurich cityscape as the Grossmünster. We take for granted high frequencies between the centre and the various districts of the city. But completion of the first tram line in Zurich did in fact require several attempts.

After Geneva became, on 19 June 1862, the fourth city in Europe and the first in Switzerland to have a horse-drawn tram, discussion began in Zurich about its own plans. Of paramount importance was the need for a link between the station and the lake for transporting both people and goods. In particular, the then still independent municipality of Riesbach emphatically supported a connection between the station and Tiefenbrunnen for its well-heeled citizens. They also wanted a line to the central cemetery (now the Sihlfeld cemetery). Travelling by tram was an unaffordable luxury for the general public.

At that time it was not the public authorities that ran public transport. It was private companies that had to apply for a concession for their profit-oriented plans and it was only here that the authorities could influence urban development. One of these entrepreneurs was the engineer Edmund Scharpe, who turned to the state council with his plan in 1863 when various other applications had already been lodged with it. On page 9 he writes:

‘I have three tracks rather than two. The two outer tracks are flat (only slightly concave) and the middle track has a groove half an inch in width, in which a guiding wheel 1.5 feet in diameter moves […].’ 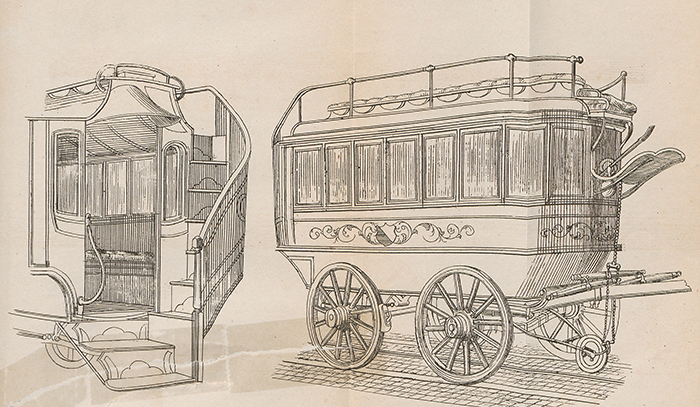 Though Scharpe’s plan impresses on account of its flexibility, it was never put into operation. Political struggles between the federation, the city of Zurich and the canton of Zurich meant that the wheels of the old omnibuses continued to become stuck in the mud when it rained. Only on 5 September 1882 did the first horse-drawn tram become operational in Zurich (Tiefenbrunnen – Bahnhof – Paradeplatz). The electric tram started running through the city of Zurich in the 1890s, ushering in the modern, industrial metropolis.