In 1936 Augusto Gansser (1910-2012) joined another Swiss geologist Arnold Heim (1882-1965) for the first Swiss expedition to the Himalayas that lasted for eight months.  During the expedition both Heim and Gansser kept detailed diaries which later became a basis for their travelogue “The Throne of the Gods” (1938) and a research volume “Central Himalaya: Geological Observations of the Swiss Expedition 1936” (1939). 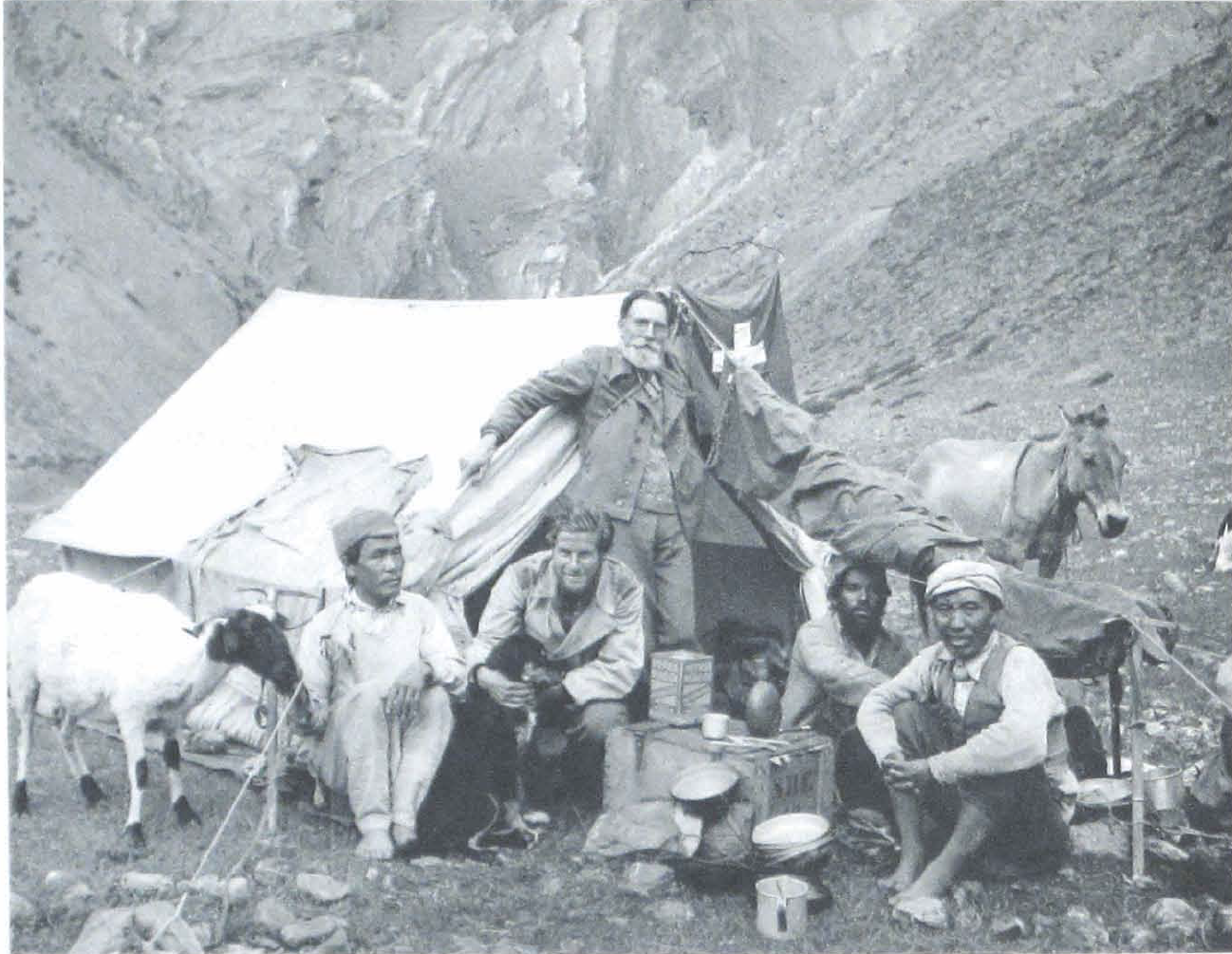 Not only were Gansser and Heim prolific writers noting every minute detail on their way but also documented their expedition with multiple geological sketches and photographs that also made their way into the travelogue. One must note that their painstakingly drawn sketches and outstanding photographs require artistic talent and dedication. 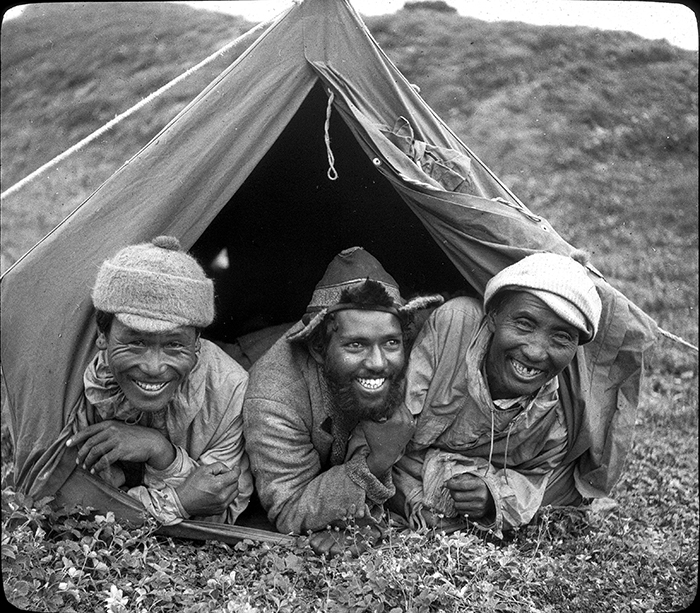 The Himalayas offered a plethora of unexplored territories to venture into, and potentially make important discoveries as pioneers of that region. As Heim puts it himself ‘a geologist already versed in Alpine technology had a good chance of solving some of the basic problems of mountain structure’ (Gansser, Heim 1939: vii). Besides, Himalayas were the highest mountain range in the world, which only added to the interest and prestige of this enterprise. Thus, the 1936 Swiss Himalayan expedition was greatly encouraged by the Central Committee of the Swiss Scientific Society.

The areas Gansser and Heim studied were in the Central Himalayas of India on the border between Nepal and Tibet. While exploring the Kali valley on the India-Nepal border Gansser identified Himalaya’s basement rupture line what he later called the Main Central Thrust. 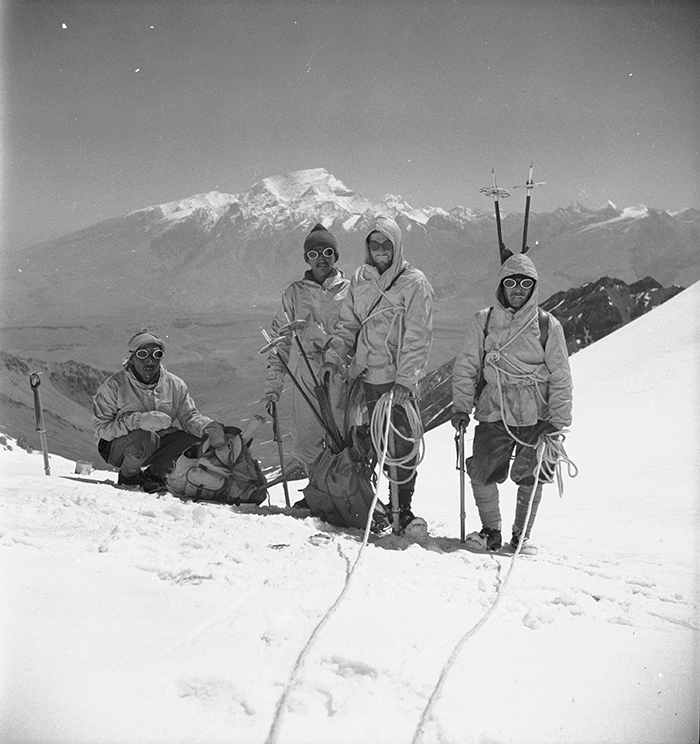 Gansser and Heim began their expedition from territories in India that were under British rule but later Gansser ventured into forbidden territories of Nepal and Tibet to explore the geology of the region. The memorable point of the expedition was when Gansser, disguised as a Tibetan lama (fig. 4), trespassed into Tibet to explore the mountain Kailash and brought back important data on geology of Kailash. 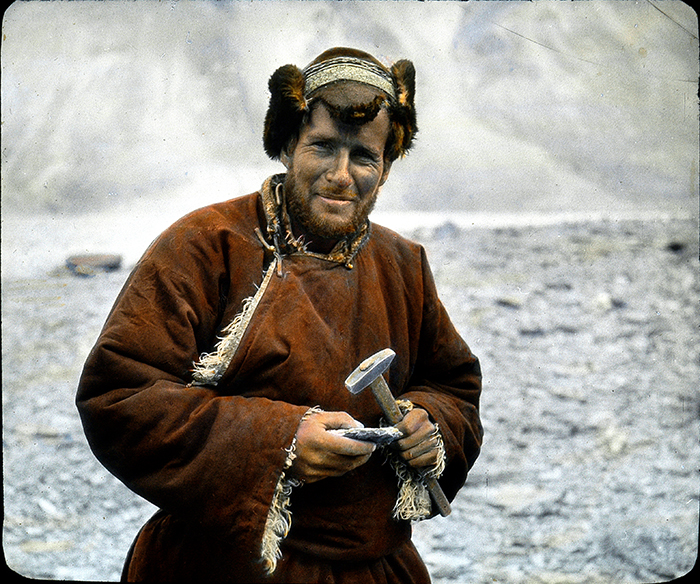 At that time only a handful of Europeans with special permission of Tibetan government managed to see Kailash, considered the most sacred site of pilgrimage. To the rest, the entry into Tibet and Kailash was strictly forbidden, collecting rock samples was sacrilege; if Gansser was caught, he would have been arrested. He wore a red sheepskin caftan under which he had hidden his camera, geological instruments and rock samples he collected from the area. Hiding behind a rock, Gansser secretly took a picture of Kailash (fig. 5) that allowed Europeans for the first time to have a glimpse of the forbidden mountain (Gansser, Heim 1939: 90-111). 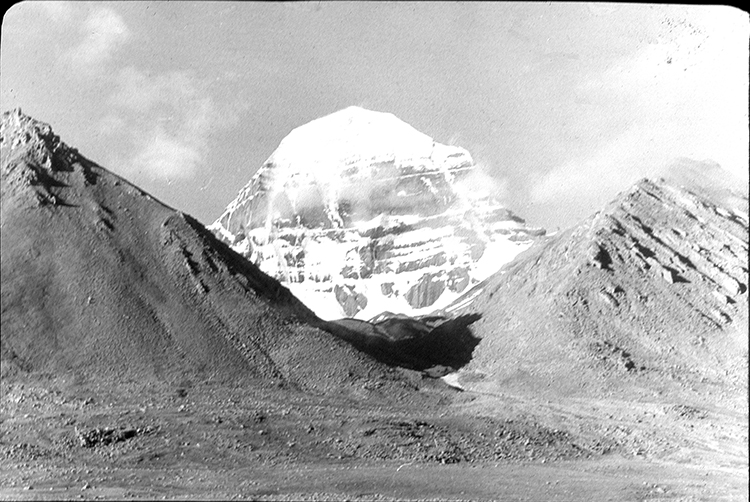 One comes across two opposite perceptions of the Himalayas: Nepalese and Tibetans saw the mountains as a place where ‘the gods live and reign’ (Gansser, Heim 1939: vii), (hence the name “The Throne of the Gods”). Perhaps, the way Swiss geologists perceived the Himalayas can be best summarised by quoting Heim, as he calls himself and Gansser ‘the pilgrims of science’, who ‘approached those stupendous masses with no less reverence’ (Gansser, Heim 1939: viii). Their primary goal is to uncover mysteries behind the geological formation of the Himalayan region but they are in awe with those majestic peaks as perhaps the pilgrim can be in awe with the holiest of sites.

The main issue that interested me is the nature of interactions between Swiss geologists and the local people they came in contact with in the age when colonialism still existed although was approaching its end. Could Gansser and Heim be seen as representatives of colonial power in the region? It might look like a paradoxical question to ask since Switzerland was never a colonial power and Nepal was never a colony. But it is the desire ‘to conquer the unmeasured and unclimbed peaks’ (Gansser, Heim 1939: 61) that brought Gansser and Heim to Himalayas, which greatly parallels with colonial perspective of exploration and expansion into unknown lands. As P. Purtschet describes, mountaineering which became crucial for Swiss national identity formation, was in fact closely linked to colonialism and ‘colonial fantasies’ that shaped world views in Switzerland (cf. Purtschert 2015: 4).

Closer examination of the travelogue revealed that descriptions of physical appearances of local people would often contain references evoking their Asian ethnicity – ‘a dark-skinned Indian boy cook’, ‘brown-skinned porters’ (Gansser, Heim 1939: 22-23), or Bhotias are described as a ‘Mongoloid tribe’ with ‘very prominent cheek-bones… their skin is brown’ (Gansser, Heim 1939: 28). On the other hand, Gansser calls himself ‘a solitary white traveller in unknown Nepal’ (Gansser, Heim 1939: 67), thus emphasizing the difference of skin colour between himself and local inhabitants. In fact, 1936 Swiss expedition is not an exception, but only one example among many. Reports from 1952 Mount Everest expedition contained many descriptions of local population’s physical characteristics which placed them into racial categories and pushed certain Orientalist stereotypes, as P.Purtschert points out (cf. Purtschert 2015: 185-186). 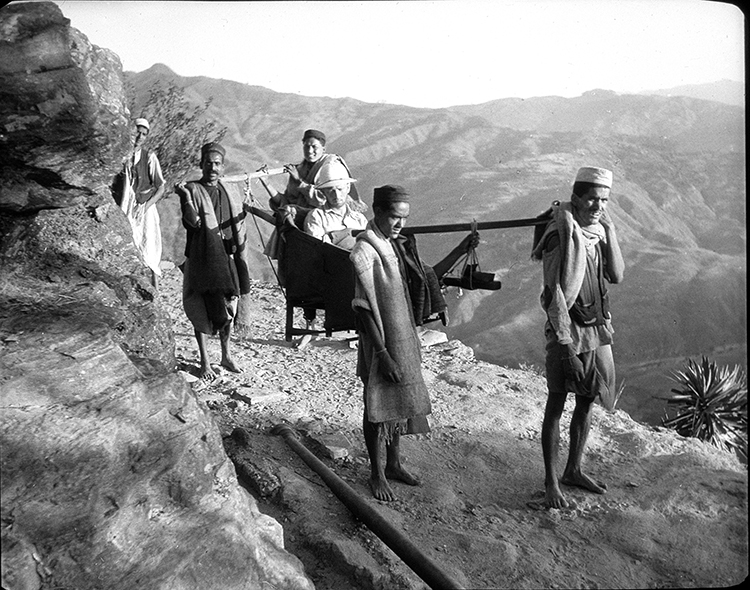 The travelogue itself is infused with colonial perspective –adventurous stories narrated from a point of view of a pioneer-explorer filled with several dozens of exotic images of local inhabitants, for which the public had an appetite. Initially, Swiss mountaineer Werner Weckert was to join the expedition as well but had fallen ill with appendicitis on the third day of the expedition. Although these were emergency circumstances, still the picture taken by Heim (fig.6) inadvertently evokes the colonial imagery: four porters, barefooted, dressed in ragged clothes carry a European man in a sitting chair. Therefore, Swiss geologists could have promoted orientalist stereotypes, thus contributing to spreading of  a colonial perspective in Switzerland.

Gansser, August and Heim, Arnold (1939): The Throne of the Gods: An account of the First Swiss Expedition to the Himalayas, [translated by Eden and Cedar Paul], New York, Macmillan Company.

Photographic images in figures 1 scanned from “The Throne of the Gods: An account of the First Swiss Expedition to the Himalayas”, [translated by Eden and Cedar Paul], by A.Gansser, A.Heim (1939): New York, Macmillan Company.

This article was written as part of the seminar Collections in Context: What Do Historians and Scientists Learn from Butterflies, Stones, and Bones?, Fall Semester 2016, hosted by Bernhard C. Schär and Michael Greeff.