Conrad Gessner (1516-1565), a polymath and Zurich city doctor, lived at a time when traditional knowledge was joined by a wealth of new experiences. Not only did the discovery of America open up unknown places, but also unfamiliar flora and fauna. At the same time, many ancient manuscripts, such as the zoological writings of Aristotle and Pliny, were rediscovered and republished (Friedrich 2009, p. 193). It was against this backdrop that Gessner published his animal encyclopaedias Historia animalium and Icones animalium, which, along with numerous other publications from a vast range of fields, rank among Gessner’s most famous works.

Gessner’s aim was to pool all knowledge of the animal kingdom in his animal encyclopaedia, largely drawing upon literary sources, but also his own observations or descriptions from other contemporary scholars. The individual volumes published between 1551 and 1558 already attracted considerable interest among his contemporaries as new editions were printed and translated into other languages relatively quickly (Egerton 2003, p. 207). First published in 1553, the book Icones animalium quadrupedum viviparorum et oviparorum, quae in historiae animalium Conradi Gesneri libro I et II describuntur was already reprinted in a new, improved edition in 1560, containing pictures and descriptions of the four-legged animals described in the volumes of Historia animalium.

In his preface, Gessner refers to the varying quality of the illustrations and their different sources (Gessner 1560, p. 7). Gessner did not have the financial means to embark on expensive expeditions and see all the animals with his own eyes. Nonetheless, he boasted that most of the illustrations had been painted “ad vivum” (from life). However, this did not mean to say that all these illustrations were copied from a living animal. The drawings of strange and rare animals in particular arose in a similar way to composite drawings, i.e. based on descriptions or existing depictions, such as Dürer’s rhinoceros (Kusukawa 2010, pp. 306-307). Dürer himself had never seen a rhinoceros and produced the woodcut at the beginning of the sixteenth century based on a detailed description and corresponding sketch (Hess 2016, p. 32). 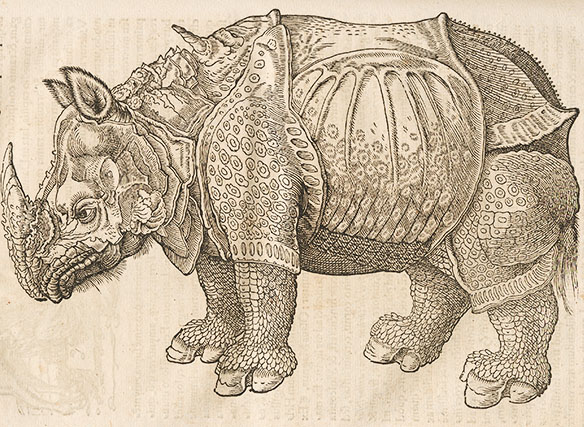 For some illustrations, stuffed animals or individual body parts were used as a model. Nor was it not uncommon for a figure to be cobbled together from various existing depictions (Kusukawa 2010, p. 307).

On the strength of these illustrations, Gessner is also regarded as the founder of modern zoology. His animal encyclopaedias were among the first to be illustrated extensively with woodcuts (Egerton 2003, p. 207). Many of these illustrations were repeatedly used in prints until into the eighteenth century and thus influenced people’s perceptions of the animal kingdom for a long time (Hess 2016, p. 32; Schmutz 2016, p. 136).

Egerton, Frank N. (2003): A History of the Ecological Sciences, Part 11: Emergence of Vertebrate Zoology During the 1500s.

Kusukawa, S. (2010): The sources of Gessner’s pictures for the Historia animalium.