Fat does not equal fat. Albert Einstein (1879-1955) also mulled over this inequation and even advised his friend Jakob Ehrat against visiting certain restaurants in Zurich. 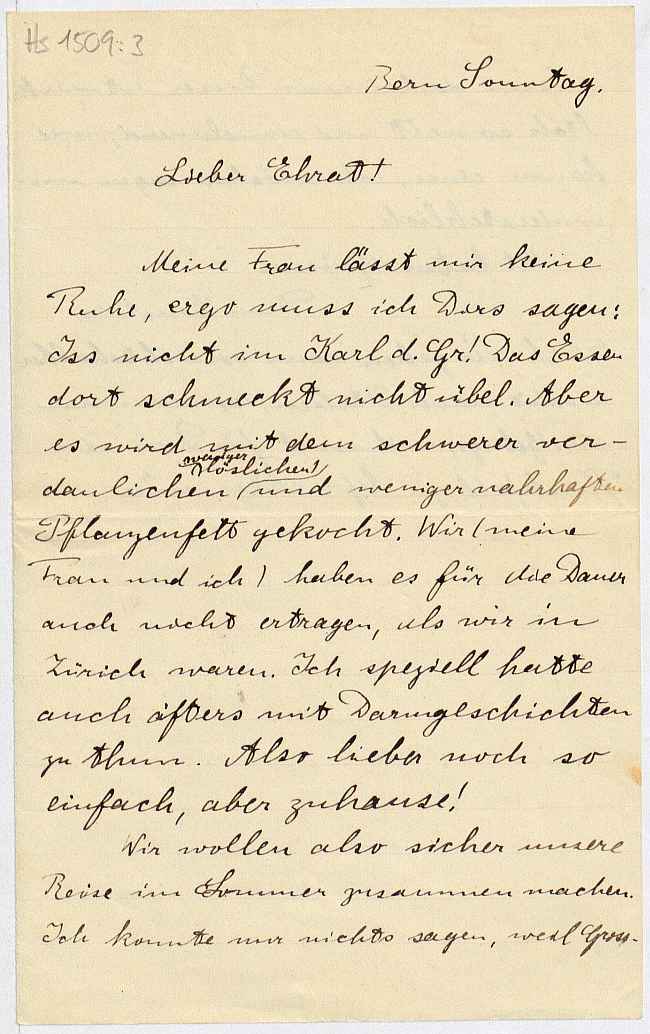 The wealth of contemporary issues also reflected in Einstein’s private correspondence includes the question of healthy eating. In around 1900, much like today, physicians, food producers and consumers hotly debated the pros and cons of vegetable and animal oils and fats. Influenced by the life-reforming trends of the time, one camp lauded vegetable cooking fats, the majority of which were obtained from palm oil, as particularly healthy, natural and wholesome.

The young Einstein family was firmly of the opposite opinion. In May 1909, Albert Einstein wrote to his friend and former fellow student Jakob Ehrat (1876-1960) from his home in Bern, where he was living at the time:

Dear Ehrat!
My wife won’t leave me be, ergo I have to tell you: don’t eat at Karl d. Gr! The food there is not bad. But it is cooked in vegetable fat, which is harder to digest, less soluble and less nutritious. When we were in Zurich, we (my wife and I) were unable to stomach it in the long run. I in particular also had bowel trouble fairly frequently. So better keep it simple, but at home. […]

The restaurant Karl der Grosse in the heart of Zurich’s old town was opened in 1898 by the successful Zürcher Frauenverein für alkoholfreie Wirtschaften (“Women’s Association for Temperance and National Welfare”), which already ran several coffee shops in the city. Sticking to their scientific principles, Mileva Marić and Albert Einstein had evidently seized the opportunity to test out the impact of vegetable fat on themselves in a kind of extended self-experiment by eating regularly at Karl der Grosse during their university years together in Zurich. As far as they were concerned, the result was clear: vegetable fat had no business in healthy, nutritious cuisine and was no substitute for good, traditional fare cooked in butter and lard.

Unfortunately, we don’t know whether Ehrat actually took notice of the dietary tips from the Einstein household. At any rate, the Zürcher Frauenverein kept Karl der Grosse going until 1974, when it was taken over by the City of Zurich, which still runs it to this day.