„Houston, Tranquillity Base here. The Eagle has landed.“

With these words uttered by Neil Armstrong during the first moon landing on 20 June 1969, America pipped the Soviet Union to the post in the race to the moon at the height of the Cold War (Jaumann 2009, 36). The years that followed until the last moon landing in December 1972 were defining in many respects and influenced an entire generation. Switzerland and especially ETH Zurich had also been bitten by the moon bug and virtually been on board the lunar module as part of the solar wind experiment to measure one of the particle flows emanating from the sun (Grünenfelder 1972, 8). ETH Zurich was involved in evaluating the results and studies on the lunar rock. And in 1970 the moon actually came within touching distance of Zurich when a chunk of lunar rock was showcased to the public during an exhibition from 21 to 23 May. The exhibition was documented in photographs by Hans Krebs, who had been commissioned by Comet Photo AG. The photographs of the exhibition coverage, whose negatives are held in ETH Zurich’s Image Archive, provide an insight into handling the events revolving around moon landing in the early 1970s and highlight the role of images in scientific processes more accurately: what do the photographs say about the role of lunar rock in connection with scientific findings from the moon samples? What do they tell us about handling knowledge and its mediation? 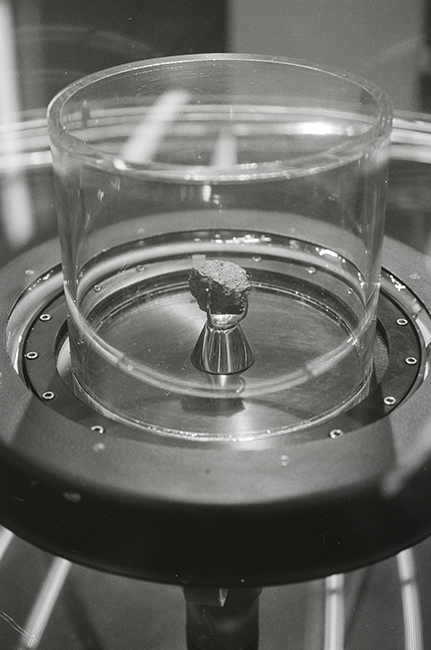 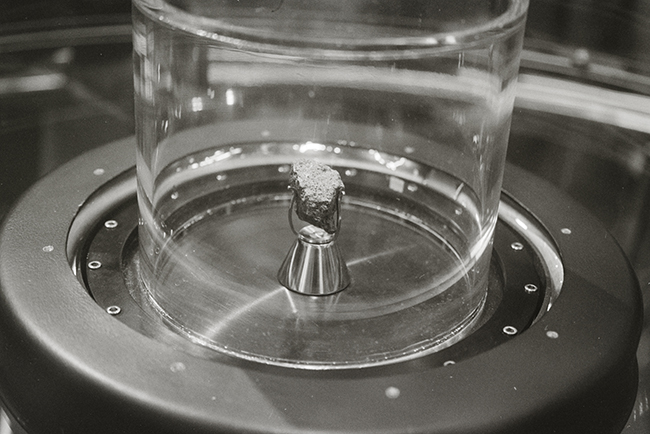 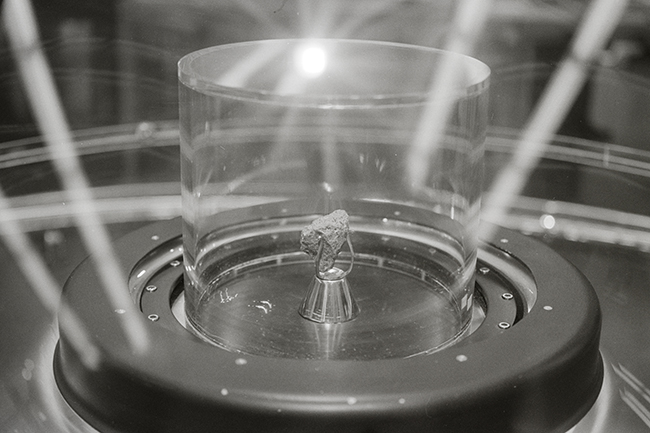 If one considers the images featuring the close-ups of the lunar rock from the exhibition (figs. 1, 2 and 3), it is striking that the lunar rock itself looks astonishingly unspectacular. Optically, it is no different to rocks found here on Earth; apart from anything else, it is very small. As a short article on the exhibition in Neue Züricher Zeitung states:

[…] a piece of the moon about the size of a nut, weighing thirty-two grams; a small, plain-looking piece of the very rock samples that the Apollo 11 team brought back to Earth from their historic moon expedition (NZZ 1970, 29).

A glimpse into the brochure published within the scope of the exhibition reveals that the lunar rock in the exhibition didn’t even take centre stage. Strictly speaking, the brochure doesn’t even mention that a rock from the moon was on display as ETH Zurich. While it reports on the first scientific findings from the first two moon landings, it barely refers to the actual exhibition. Thanks to its description in the Neue Züricher Zeitung, the rock can be attributed to a sample of finds from a NASA investigative report. Accordingly, it belongs to the same group of rocks as another lunar rock depicted in the brochure and thus vaguely resembles terrestrial basalts in terms of its make-up (NASA 1975). In other words, not only is the visual impression of the lunar rock on display largely unremarkable, but also its chemical composition. The lunar rock itself therefore offered little that is new from a scientific perspective. So why go to such great lengths to exhibit the rock and its apparatus?

If you look at other images in the exhibition (Figs. 4, 5 and 6), however, it becomes apparent that, despite its plainness and negligible novel scientific value, the lunar rock captured the fascination of the hordes of visitors who flocked around the rock. 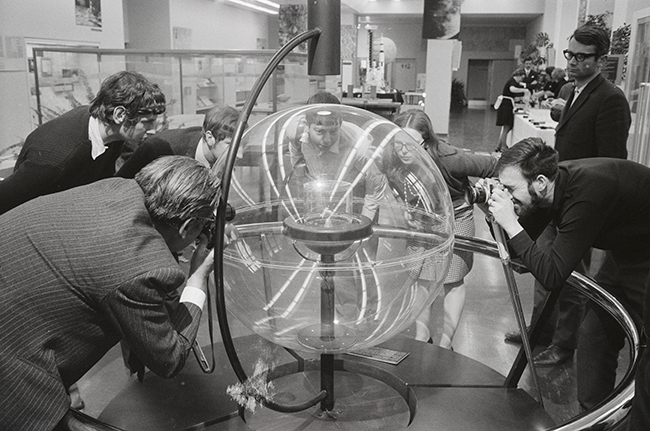 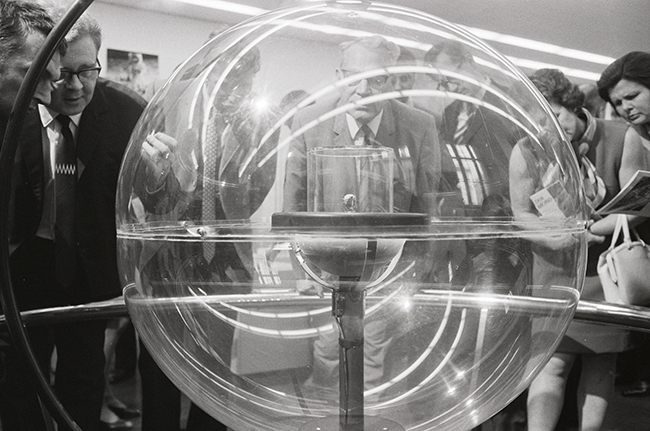 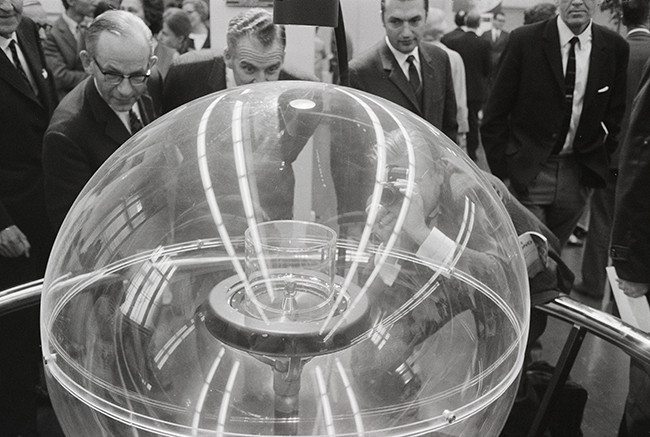 The photographs show that the lunar rock is not arranged in a classic rectangular exhibition show case, but rather receives its own “cosmos” via the Plexiglas protective case, the heart of which it forms. Consequently, it was not only figuratively the centrepiece of the exhibition, but also literally its centre. This impression, already evoked by the shape of the protective case, is heightened even further by the reflections of the overhead lighting, which are clearly visible on the photographs. The light reflexes actually swirl around the rock, creating the visual impression that it is emitting a secret force that attracts the beams of light and steers them on their course. The reflexes portray the rock as a sacred object that contrasts with its ordinary appearance (Schenkel 2013, xii).

The way the rock is presented suggests it is about more than the rock as such. Here, thanks to the staging, a narrative designed to reveal something that goes beyond the rock as an object is created: namely, the human race’s technical achievement of landing on the moon. The rock therefore becomes part of the whole, a representative of the moon, and assumes the role of witness. It validates the moon landings and the scientific findings gained as a result, becomes a reference and thus provides evidence (Latour 1996, 199f. and 237ff).

Nonetheless, this evidence is not ironclad. As the lunar rock barely differs from rocks found on Earth – either visually or chemically – the rock needs the exhibition, complete with a series of other exhibits, images and explanations around it, to transform it into lunar rock. In other words, for the public the lunar rock is only lunar rock if presented as such; if placed in the context of the space voyage and the story of the moon expedition, as another photograph from the exhibition reveals, for instance (fig. 7) (Wagner 2007, 98). 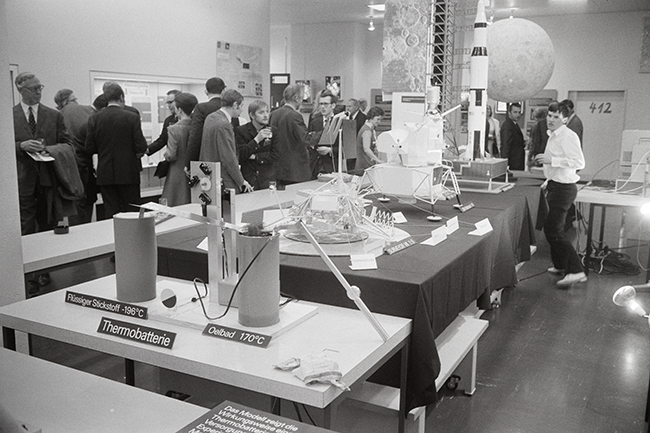 Incidentally, ETH Zurich was still using lunar rocks to study the moon in 1970. Two years later, Peter Signer, who had been involved in the exhibition brochure and presumably the exhibition itself, commissioned a series of photographs of other lunar rocks from ETH Zurich’s Photographic Institute. The rocks that were photographed there either correspond to the exhibition’s star lunar rock or the depictions of lunar rock in the brochure. Beyond the hype surrounding a single lunar rock, which was good publicity, more lunar rocks were therefore owned – at least temporarily – by ETH Zurich and were thus in Zurich. Rather than being opened up to the broader public, however, they were studied behind the institute’s closed doors.