After the Second World War, in the early days of the Cold War, Iran gradually began to break away from the geopolitical power games and economic greed of the major powers, which had especially set their sights on Iranian crude oil. At the end of 1949, the Iranian government founded Iran Oil Co. (Sherkat Sahami Naft Iran), an autonomous state-owned company.

Its goal was to conduct large-scale crude oil explorations outside the concession area of the British-owned Anglo Iranian Oil Co. (AIOC, now BP) in the south of the country. Formed as a branch of Iran’s First Seven-Year Development Plan, the company was supposed to help research the natural resources of the oil-rich country more effectively and tap into unknown sources of potential affluence.

In October 1949, the Swiss Arnold Heim (1882-1965), widely known as an outstanding petroleum geologist, was hired as chief geologist by Iran Oil Co. Heim, who was already about to reach the age of seventy, held this position until his return to Switzerland in May 1952 for health reasons. An important part of his mission was to bring together a group of experienced petroleum geologists to carry out research and expeditions in various regions of the country. From the end of 1949 to the middle of 1950 Arnold Heim assembled a team of seven petroleum geologists, who joined Iran Oil Co. for the coming years. Its core consisted exclusively of Swiss people. The team included Pierre Soder, Heim’s long-time companion and successor as chief geologist of Iran Oil Co. Augusto Gansser, Heinrich Huber, Jovan Stöcklin, Karl Goldschmid, Ernst Frei and Max Furrer. 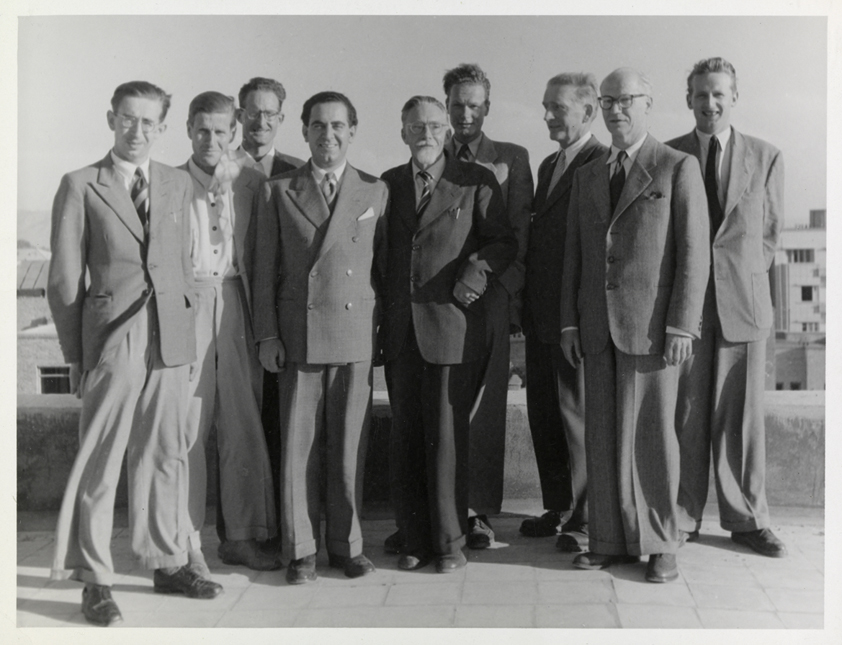 The extremely varied projects that followed took the Swiss oil geologists into every nook and cranny of the country, as is documented extensively in numerous field books, diaries, letters and photographs. The principle activities focused increasingly on the region around the City of Qom, where they expected to find large crude oil reserves – this was eventually confirmed in 1956 by a team headed by Augusto Gansser. They kept returning to the headquarters of the Iran Oil Co. in the capital Tehran, where their families were also staying, to draw up their maps and reports.

The Swiss petroleum geologists travelled to Iran at a time when the concession agreement with the AIOC, which had been perceived as exploitative, was being renegotiated. The AIOC had held the state concession to extract oil in Southern Iran since 1933 – indeed, the oil fields around the City of Abadan ranked among the most important in the world at the time. After the Second World War, however, the Iranian government increasingly perceived these concession conditions as unfair; fresh negotiations were supposed to bring the Iranian nation greater revenue from the crude oil business. The tough negotiations failed to produce an agreement, which boosted the nationalistic powers. In 1951 Iran eventually nationalised the AIOC and founded the National Iranian Oil Company (NIOC), a step which led to years of international dispute with Great Britain, which was only resolved in 1954 with the intervention of the UN. According to contemporary commentators, however, the foundation of Iran Oil Co. was not so much against British geopolitical interests as claims from the Soviet Union, which had been demanding oil concessions for the north of the country from the Iranian government since the end of the Second World War.

The fact that the Iranian government entrusted a group of Swiss with researching the crude oil reserves in the country in the flashpoint between the East and West was surely no coincidence. There is much to suggest that Switzerland’s neutrality during the Cold War may have been key advantage for Swiss scientists searching for experiences and adventures abroad. After all, Article VIII of the employment contract between the Iranian Planning Administration and Arnold Heim explicitly states that he was to stay away from any political activities and not interfere with the country’s internal affairs.

The private correspondence between the geologists, however, quickly reveals that the day-to-day work in Iran’s extremely heated climate on both the international and the home front in early 1950s was very difficult for the geologists and their families, and they were repeatedly subjected to xenophobic assaults in everyday life. As Augusto Gansser wrote in a letter to his old friend and predecessor Arnold Heim on 16 August 1952, for instance:

“[The] Azerbaijan trip took almost a month before I got back the necessary permits for the border regions. Of course, this was due to the political turmoil, which seems to have settled down somewhat on the face of things, but is still bubbling away under the surface and bound to erupt again every so often. The set-up with our friend Ka. in the government does not look at all good. The xenophobia has increased, our wives are being harassed on the streets. On my trip [sic, “I” missing] have had many difficulties with the military, which conducts very strict, complicated checks. This invariably means a lot of time is wasted, especially if you are on the road for 13 to 14 hours a day like us.” (Letter from ETH Library, University Archives, Hs 494: 82.9)

While Augusto Gansser left Iran in 1957 to take up a dual professorship at ETH Zurich and the University of Zurich, some of his team continued to work there into the 1960s.