Albert Robida (1848-1926) was a French writer, draughtsman, painter, caricaturist and journalist. He began his career as an illustrator for popular Parisian magazines such as Chronique illustrée and Le Pollichinelle. He became famous for his illustrations of luxury editions of literary works by François Rabelais, Charles Perrault, Honoré de Balzac and others. From 1879 onwards, Robida published a series of parodies on Jules Vernes’ Voyages extraordinaires under the title Voyages très extraordinaires de Saturnin Farandoul. This collection was followed by a trilogy of richly illustrated early science fiction novels Le Vingtième Siècle (1883), La Guerre au vingtième siècle (1887) and La vie électrique (1890). 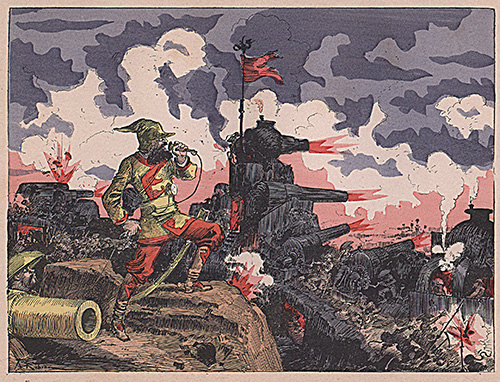 Robidas novels are unique for their time. In contrast to Jules Verne, who always emphasizes the exceptional and adventurous character of new technical inventions, Robida portrays them as part of everyday bourgeois life and tries to anticipate the consequences for society, which he often succeeds with astounding accuracy. For example, he predicts the equality of women, whom he presents as the bearer of the right to vote and to stand for election, as wearing trousers, smoking, as a doctor or as a lawyer. He also foresees mass tourism and environmental pollution with astonishing clarity. He sees the great wars of the twentieth century as determined by rockets and chemical warfare agents. With the “Telephonoscope”, a screen that broadcasts the latest news and can also be used for telephone conferences, he also visualizes the importance of modern media technology. Thus, the above illustration of a war correspondent at the forefront correctly predicts journalistic practice such as that used in the Gulf War of 1990/91, for example.

Also in the collection are the Contes drolatiques by Balzac with Illustrations by Albert Robida (3 volumes, 1925).

Several works of Robida are online at Gallica.