The history of Swiss cartography begins with a chart of the country, still classed as a mediaeval “mappa mundi”, with Rigi as the centre point. It was published in 1479 in Albrecht von Bonstetten’s first geographic description of Switzerland, Superioris Germaniae confederationis descriptio.

Detail from the Dufour Map, around 1860. 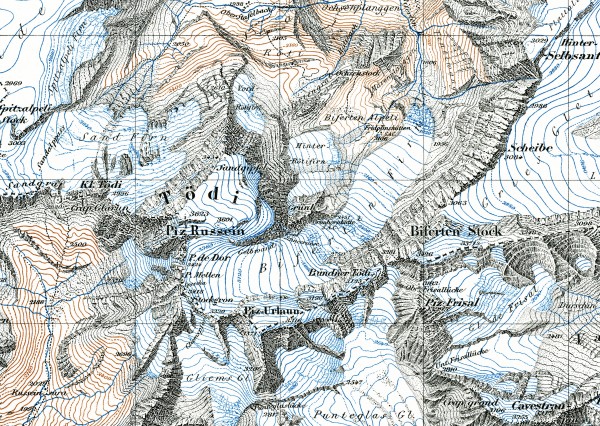 Detail from the Siegfried Map, 1930 (zoom by clicking on the image). 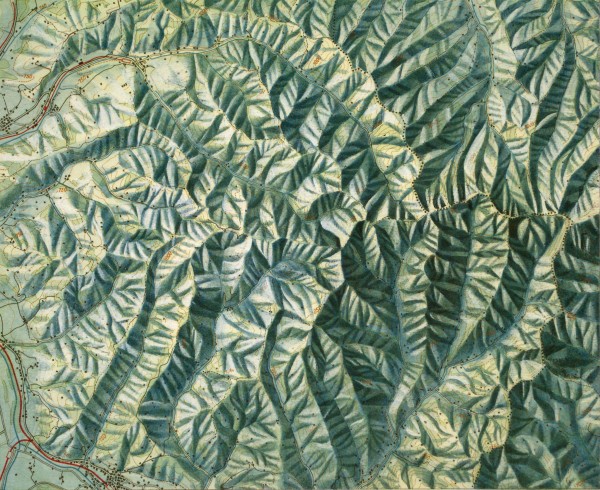 Barely 20 years later, Zurich city physician Konrad Türst drew the oldest known map of Switzerland in pen-and-ink and brush on parchment. Another full map of Switzerland from the early modern period stems from Aegidius Tschudi. It was published in 1538 and for decades served as a basis for subsequent maps.

The Grosse Landtafel des Zürcher Gebietes by Hans Conrad Gyger is regarded as the finest and most important Swiss map of the 17th century. Thirty-eight years in the making, a large area of Confederation was systematically measured for the time. With the extremely effective depiction of the landforms, Gyger was way ahead of his time.

The 18th-century maps worth mentioning include the richly illustrated Swiss map containing the first elevations by Johann Jakob Scheuchzer. In the course of the Enlightenment, the Aarau-based textile manufacturer Johann Rudolf Meyer seized the initiative and produced the Atlas Suisse. The 16-page map series was created from 1786 to 1802, at a time when France was reeling from the French Revolution, and was the first newly accepted and coherent map work of Switzerland since Tschudi.

In 1809, when the Swiss border needed defending, there was a lack of maps that displayed its precise course. For this reason, there were already efforts to create a completely new Swiss-wide map from 1810. With the Dufour Map, which marked the birth of official cartography in Switzerland, this goal was achieved by 1864. The map series was extremely well received internationally and won several awards, such as an honorary gold medal at the World Fair in Paris in 1855. The rise of alpinism was soon followed by a call for larger-scale maps. However, it was not just the scale that shifted into focus with the mounting interest in the alpine world, but also as natural a representation of the relief and rocks as possible. The Siegfried Map was published with elevations and its masterly rock drawings from 1870. Official topography continued from 1938 in the National Map of Switzerland we know today. Swiss cartography of the 20th century, especially the development of relief cartography, was shaped substantially by Eduard Imhof.