The postcard collection belonging to Adolf Feller (1876-1931), a manufacturer of electrical devices from Horgen, contains nearly 54,000 postcards from all over the world. Following Feller’s death in 1931, his daughter Elisabeth took over the collection until the 1970s. The majority of the postcards were sent between 1889 and 1954. 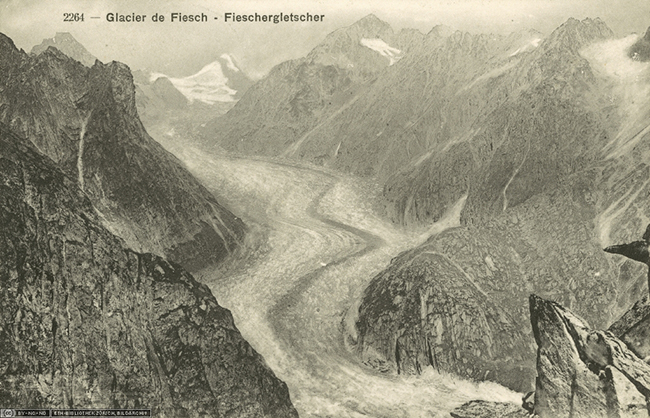 The complete postcard collection has been digitised and is now freely accessible on Bildarchiv Online. The images are available free of charge in screen resolution for research, teaching and private use under a Creative Commons Licence.

The digitisation process involved photographing both sides of the postcards and transcribing the messages. As a result, the collection can be browsed and researched, and constitutes a unique cultural and historical collection. For instance, it depicts the golden age of Alpine grand hotels during the Belle Epoque and thus enriches the current discussion on new large-scale projects and landscape devaluation in the Alps. It bears testimony to a transformation in the sights over time and portrays building styles. The postcards are contemporary documents, including the content and language of the messages. Even more than photos, they transport a spirit of the age in the image contents commented upon with the respective orientation towards beauty: current car models, fashions in clothing and interior design.

The fact that the majority of the postcards were actually sent – 35,000 to the collector himself – opens up an additional research dimension: the stamps also bring a piece of contemporary history to life and offer philatelists extensive study material. The roughly 30,000 postcards featuring Swiss motifs were catalogued according to landscape planning criteria and document Switzerland’s settlement and landscape development.