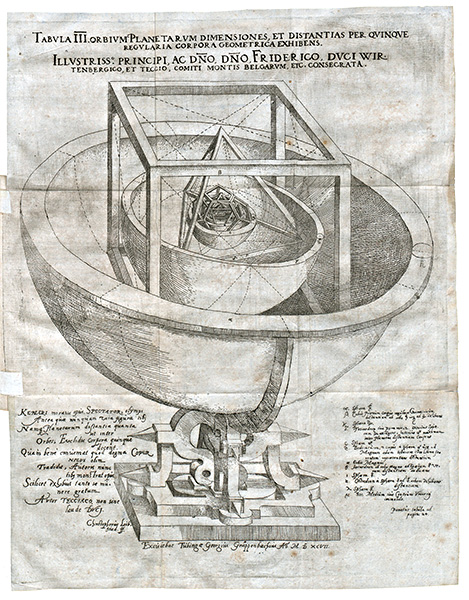 Here is a quote on his astronomical debut work Mysterium Cosmographicum from the publication Buchschätze der ETH-Bibliothek:

… [in] Mysterium Cosmographicum, which was published in 1596, Kepler investigated the causes for the number of planets, the distances from the sun and the periods of their movement based on Copernican theory. He was of the opinion that the earth’s orbit formed the basic dimension for entire blueprint of the planetary system. The “cosmographic mystery” he presented supposedly consisted in the fact that the five regular or platonic bodies (dodecahedron, tetrahedron, cube, icosahedron and octahedron) were embedded between the six planets known at the time in such a way that each of the five bodies is touched by two neighbouring planetary spheres.

Figure 3 above depicts the outer sphere of Saturn touching a circle and in it Jupiter’s sphere. This is then followed by the inner planets Mercury, Venus, Earth and Mars. Kepler made two prototypes of the model from coloured paper and planned on having it cast in silver. The silver version was also supposed to serve as a goblet for various drinks.

Marked by a sizeable dose of mysticism, however, the model ultimately proved flawed as the resulting interplanetary distances were inaccurate. Nevertheless, Kepler managed to improve Copernicus’ world view considerably and supported the heliocentric hypothesis in subsequent decades by adopting elliptical planetary orbits.

Mysterium Cosmographicum in the library catalog