Lewis Morris Rutherfurd (1816-1892) – sometimes also written Louis M. Rutherford – was a lawyer, astronomer and pioneering astrophotographer. He was regarded as a practically minded scientist, who was far more interested in new instruments and their usage than notable publications.He built the new gadgets himself, including a spectroscope, or had them made under his supervision. He also constructed the first telescope for astrophotography, using a twenty-nine-centimetre refractor produced by his friend Henry Fitz, a telescope manufacturer. In order to achieve the desired quality of the images, various improvements and technical innovations were necessary. Due to the long exposure time, the telescope had to follow the movement of the moon, complete with the photographic medium. Moreover, Rutherfurd used a new carrier medium (colloid emulsion) for the photographs. In December 1864, the first photographic telescope was finally ready. The new technique made images of the moon possible in an unprecedented quality. In 1874, Rutherfurd received the Rumford Medal from the American Academy of Arts and Sciences for his improvements to the processes and methods of astronomical photography. 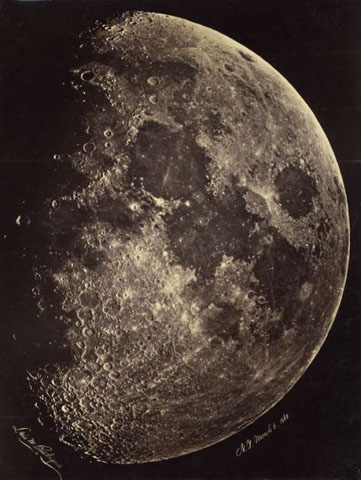 The photographs of the moon, sun and stars were taken in Rutherfurd’s private observatory, which he had constructed in the garden of his house in New York. The picture from 6 March 1865 is regarded as the best photograph of the moon. The original negative was 1.7 inches in diameter and permitted an enlargement of up to twenty-one inches. Copies of the photograph were sold commercially. Rutherfurd bequeathed his original pictures to Columbia University. ETH Library’s copy came into its possession together with the Collection of Astronomical Instruments. As Rudolf Wolf wrote in his Verzeichniss der Sammlungen der Zürcher-Sternwarte (“Index of the Collections from Zurich’s Observatories”) from 1878:

“Photograph of the moon by Louis M. Rutherford. Donated by the photographer via the intermediary Professor Clausius in 1865. This wonderful depiction features the moon after a photograph produced by Mr Rutherford in 1865 III 8, i.e. when it was twelve days old, in New York and then enlarged to a diameter of fifty-three centimetres.” Wolf, Verzeichniss, p. 21